Instead of the annual December Anniversary of the New Mother of Perpetual Help Cemetery, Adazi-Nnukwu, Anaocha LGA, Anambra State, the cemetery, this 2021, recorded the presence of many individuals from all walks of life for the One Year Memorial Mass in honour of the late Rev Sr Margaret May Ngozi Ibeh, who previously organized the said anniversary.

The One Year Memorial for the deceased Sr Ibeh, an Adazi-Nnukwu indigenous female religious, which was organized by Adazi-Nnukwu Vocational Association, and held on Wednesday, December 15, had many priests, religious and lay faithful; who included the members of Purgatorian Society from Awka Diocese, Ekwulobia Diocese and beyond, in attendance.

It will be recalled that the late Sr Margaret Mary Ibeh of the Mystery of Love Congregation, who was based in Texas, USA, had, with the support of her benefactor and friend, Dr Pamela New of USA, re-built the Mother of Perpetual Help Cemetery, Adazi-Nnukwu, into a sacred place of prayer. 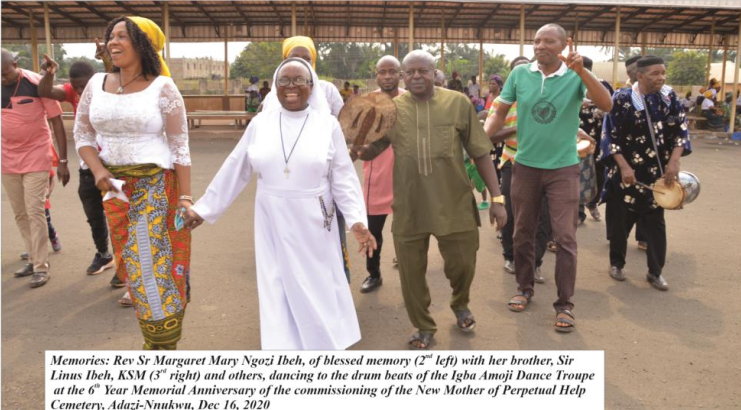 Sr Ibeh had, since 2014 when the Catholic Bishop of Awka Diocese, Most Rev Paulinus Ezeokafor, blessed the new cemetery, single handedly hosted the annual anniversary until December 16, 2020. She died on January 16, 2021 and was buried on March 6, 2021 at the same Mother of Perpetual Help Cemetery.

Leading in the concelebrated Mass to mark the One Year Memorial of Sr Margaret Mary Ibeh at the cemetery, the Bishop-elect of Nnewi Diocese, Most Rev. Jonas Benson Okoye, commended the late Sr Ibeh for what he described as her commitment to her apostolate of helping humanity.

Bishop Okoye, who hails from Adazi-Nnukwu, lauded the deceased for the model cemetery project, as well as the annual anniversary she hosted in honour of the dead on the feast of Our Lady of Guadalupe and the many individuals she positively impacted their lives and described them as worthwhile legacy.

In his homily, the parish priest of St Gabriel’s Parish, Ifitedunu, Rev. Fr. Peter Eche, tasked all on a life well lived so as to be prepared for death which he described as a necessary end in order to gain eternity thereafter.

The homilist encouraged the living to make proper use of their talents so as to leave worthwhile legacies behind.

In his remarks, the President, Adazi-Nnukwu Vocational Association, Rev Fr Julian Anaetoh, thanked God for what he described as the special gift of the late Sr Ibeh to both the association and the community. He solicited for support from all so as to sustain the annual anniversary of the cemetery which was initiated by the deceased.

The chairman appreciated all who attended the event, urging other Catholic communities to take home the idea of setting up beautiful cemeteries in their towns. He prayed God to grant eternal rest to the soul of the dead and urged the bereaved family to take solace in God.

Speaking to the press, one of the brothers of the late Sr Ibeh, Sir Linus Ibeh, KSM, thanked the association for the memorial which was organized in honour of his late sister. He prayed God to grant the soul of the deceased eternal rest and prayed for the grace to sustain the legacy she left behind on the family, the association and the community.

Also speaking, the President, Purgatorian Society, Awka Diocese, Mr Matthew Ebekue, expressed delight over the memorial Mass, which, he said, was organized to pray for the dead and to celebrate the life and times of the late Sr Ibeh. He called on all to emulate the virtues of the deceased.