Batchers and shops along Roban Road, very close to the Vehicle Inspection Office, VIO, in Awka, the Anambra State Capital, have been demolished. This followed an order by the office of the Awka City Town Development Authority, ACTDA, to evacuate what it described as shanties.

Visiting the site of demolition, Fides reports that the artisans were in despair with complaints that their sources of livelihood had been truncated. The Town Development Authority and Post Primary School Service Commission, PPSSC, however, reacted, saying that the artisans had enough time to relocate their businesses. ACTDA also claimed no one’s property was destroyed in the course of duty.

Emmanuel Okoye, a welder, who owned a batcher along the fence, told Fides that the government gave them a short notice this year, even though they had received a prior notice to vacate the environment, on November 30, 2020. He added that they pleaded with the authority to allow them stay longer before ejection. 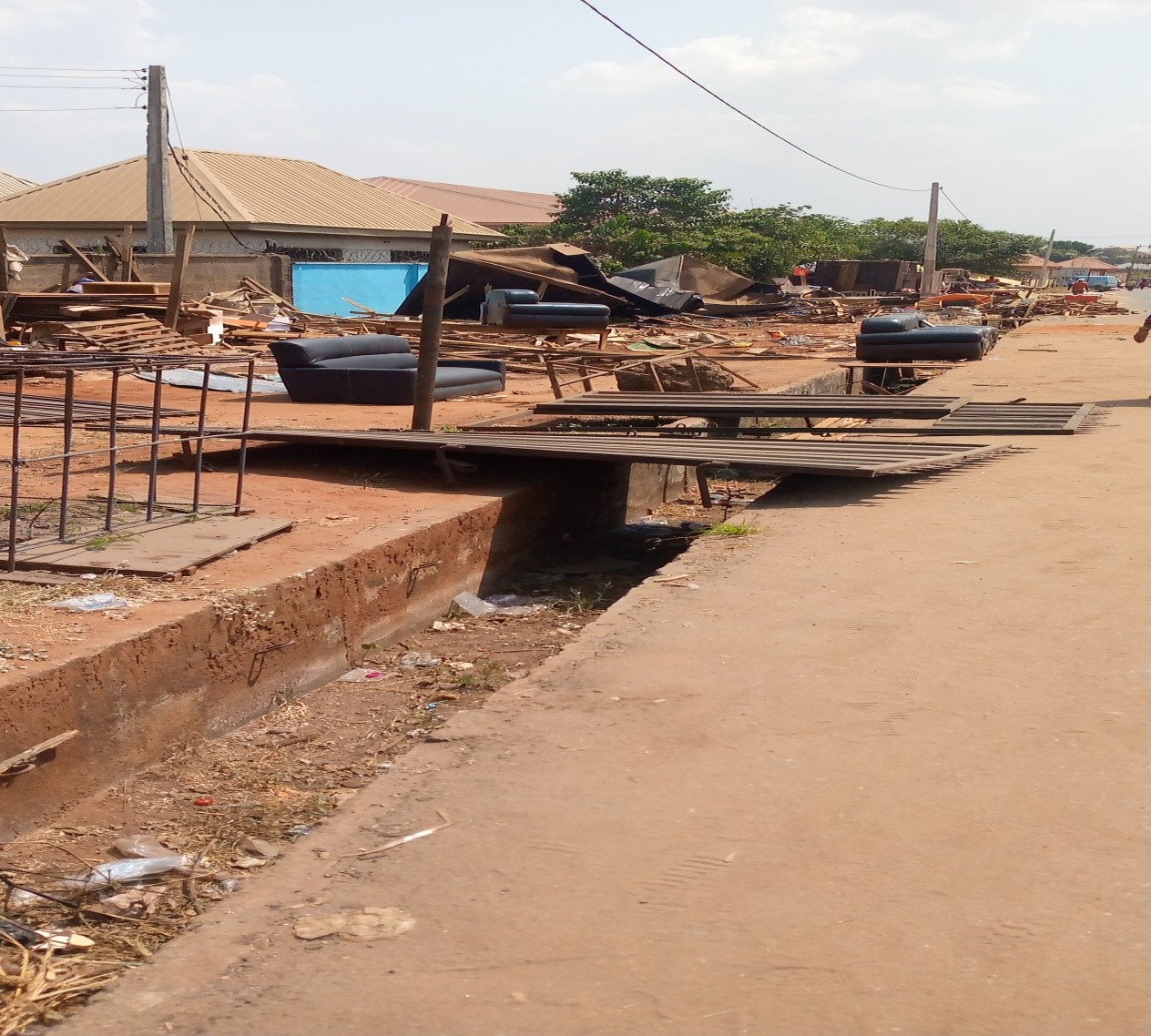 Some of the demolished shop along Roban Road

The removal order by ACTDA read, ‘You are hereby ordered to remove this development and reinstate the land to its original state within 7 days from the date of this order for the following reason: illegal structure.

‘If at the expiration of 7 days you fail to comply with this order, the board will take necessary steps to enforce compliance and recover from you all the expenses incurred.’

Okoye added that prior to the November 30 notice, there had not been any earlier notice to quit the space since he began to stay there in 2017. He also said that he was the first occupant of the place after he was ejected from a similar environment and added they had always paid rent to a person only identified as Bishop, who Fides could not reach as at the time of filing this report.

However, the Post Primary Schools Service Commission, PPSSC, according to him, laid claim on the pieces of land, and they had begun arrangements to pay rent to them even though they had already paid ‘Bishop’ for the year. While they were yet to conclude on Thursday, February 11, 2021, men from ACTDA came with a bulldozer on Wednesday, February 10 and demolished the batchers.

While Okoye noted that in the midst of these, PPSSC had petitioned them, he pleaded with the state government to provide an alternative place for them where they could move their businesses to.

Abayomi Benson, a furniture maker, whose workshop was demolished, simply told Fides that the Post Primary Service Commission, PPSSC, reported the owners of the batchers to the government.

Venerable Barr. Amaechi Okwuosa, the Managing Director/Chief Executive Officer,  ACTDA, when contacted, declared the batchers illegal and said those areas became a hideout for criminals which put the commuters and residents in the area in danger. He added that they had a guideline for the development of the city and those structures never had approvals from their authority.

He further said that they were erected on government land which caused setbacks on the high tension electricity structures, adding that the place was a layout with an existing map, and that the structures defied the map.

‘By January, about eight of them came to ask for an extension of time which I declined and directed them to move by the end of January. Even five days before the demolition, my staff went there to remind them and they left, because during the demolition, we did not encounter any wares or property, just the structures,’ he explained.

The ACTDA Director then warned people who erect illegal structures in empty spaces, that the authority had zero tolerance for erection of shanties. He added that it did not follow the level of development they aimed at in the state capital.

When Fides called on the PPSSC, Barr. Chinwuba Aniebonam Onebunne, Director, Investigation and Compliant Unit, said that sometime last year, they had incidences of criminals accessing their environment through the shanties and destroyed some armoured cables and carted away their property which led them to writing the Commissioner for Environment and copied the Anambra Physical Planning Board and ACTDA, requesting the artisans’ evacuation.

Contrary to Okoye’s claims, however, Onebunne said the artisans approached them for negotiation to continue staying there when they perceived that they could have a stronger covering from PPSSC, being a state agency.

Referring to ACTDA, Onebunne who confirmed he was alerted during the demolition said, ‘Sometime in November last year, they gave these people notice to leave, which expired on 30th of November last year. Since then, they did not pack out; they were negotiating for a better option.

While he told them he was not the Commissioner who had decided that those structures would not remain, he added, ‘We had alerted the government, and, so, we cannot say that those things are bad today and tomorrow we say they are good.’