The Bishop of the Catholic Diocese of Ekwulobia (CADEK), Most Rev Peter Ebere Okpaleke, has charged human persons to dispose themselves to the grace of God and accomplish their God-destined individual vocations and missions so as to ensure stable development.

Bishop Okpaleke, who gave the charge in his homily at the celebration of the 41st Anniversary of the Catholic Diocese of Ekwulobia-owned St Dominic Savio Seminary, Akpu, Orumba South LGA, Anambra State, on Saturday March 13, said everyone was called by God to accomplish their own irreplaceable task.

The Catholic prelate encouraged all to, on a regular basis, find out from God the vocation He designed for each of them at every point in their life and ensure they accomplished that for their wellbeing and that of others. 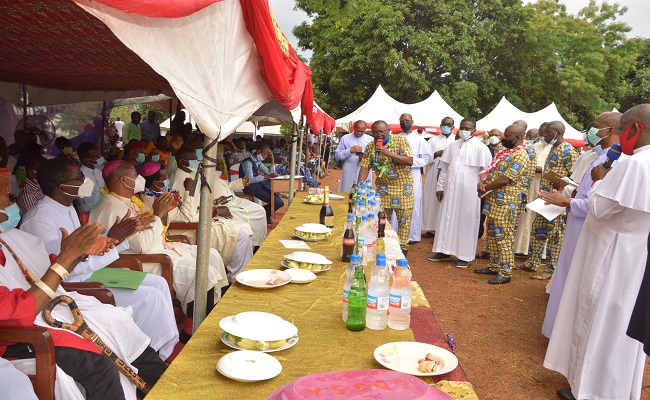 He kicked against a situation where someone was appointed to replace another person in a position which did not match the latter’s vocation, insisting that someone’s charisma and vocation should be put into cognizance for various positions.

The bishop, who at the anniversary which doubled with the 2021 Founders’/Parents’ & Alumni Day of the seminary, administered the Sacrament of Confirmation on fifty seminarians, thanked God for the gift of the seminary through which many priests and lay individuals got proper formation.

He commended the seminary sponsors, the seminary benefactors, the Catholic Women’s Organisation (CWO) that has been supporting with her weekly food apostolate and more, as well as the parents and others, urging them not to relent.

The bishop, who is the proprietor of the seminary, commended all that graced the event and those that supported the seminary for the successful formation of the young ones and assured them of the blessings of God as stated in the Gospel of Matthew 10:40-42.

Bishop Okpaleke, who further based his reflection on the calling of Samuel in the Book of I Samuel Chapter 3: 3-10, Chapter 1 and Chapter 2: 18-21, urged the seminarians to be docile to their formation for the proper discernment of their vocation and accomplishment of the mission which God called them for.

He noted that just as God sent Samuel to minister to Eli the high priest, the parents of the seminarians also sent them to the seminary to listen to the voice of God and carry out the challenging task which he (God) called them for.

This was even as he enjoined the formators to be patient with the seminarians entrusted unto their care so as to properly guide and direct them.

In his address of welcome, the rector, St Dominic Savio Seminary, Akpu, Rev Fr Anthony Akabogu, traced the history of the seminary which was established in 1980 with the vision to form candidates after the exemplary life of Blessed Iwene Tansi, and had the late Rev Fr Raphael Ikem Oliobi as the pioneer rector.

Rev Fr Akabogu, who revealed that the school would on its 41st anniversary admit the first set of her senior secondary school students, solicited for donations from all for possible upgrade of the seminary to a senior secondary. Among the pressing needs of the seminary according to the rector’s address, were two hostel blocks, classroom blocks, and science laboratories.

While paying tributes to the past rectors of the institution, who included the Catholic Bishop of Awka Diocese, Most Rev Paulinus Ezeokafor, who was also present at the event, the rector explained that the creation of the new CADEK necessitated the need to upgrade the seminary to a senior secondary.

The seminary in the address, appreciated Chief Sir Ikenna Okafor, KSS, who is building science laboratories on behalf of his Non-Governmental Organisation (NGO), known as Idi Ezeani Nzekwubuo Foundation and an old boy of the school, Chief Christian Ezenwoke, who has taken up a hostel block project. The laboratory project which is a 6-month project, is expected to be completed by August 2021.

In his remarks, the chairman of the occasion, Mr Valentine Obienyem, called on the old boys and those he described as lovers of development and quality formation to identify with the seminary, especially in its current sustainable upgrade stage.

Recalling the quality formation he said the school gave him and others, Obienyem, who is an old boy of the seminary and the Chairman, Board of Trustees of the Alumni Association, said the anniversary was a time for the old boys to give back to their alma mater.

The event which featured donations by the Alumni Association, some old boys of the school, the CMO and the CWO of CADEK, St Thomas Aquinas’ Parish, Awka, the PTA and St Matthew’s Parish, Akpu, among others, also had a former Governor of Anambra State, Sir Peter Obi, CON in attendance.