The All Progressives Grand Alliance (APGA) Secretariat, Awka, Anambra State, was last Tuesday, February 23, greeted with an outpouring of accolades as the member representing Aguata Federal Constituency, Hon Chukwuma Umeoji, declared his interest to contest for the governorship seat of Anambra State in the November 6, 2021 election.

Umeoji, who said he would fortify security, human development and robust development in Anambra if elected the next governor of the state, appealed to the party leadership and members to be given the mandate to fly the APGA flag in the governorship election. 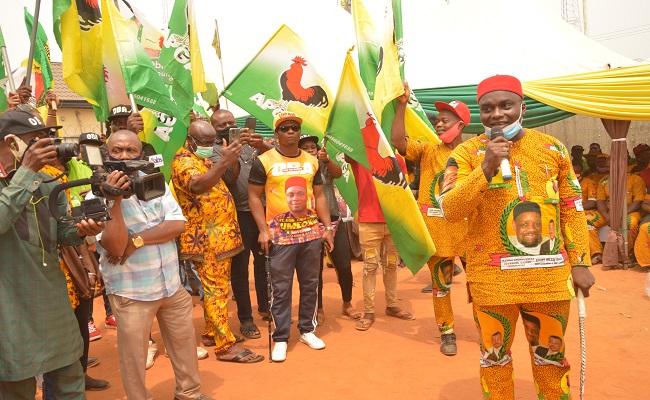 The legislator commended Governor Willie Obiano for what he described as the model security architecture which he had put in place in Anambra State and the priority which his administration gave to human welfare, saying that Anambra remained the best in security, prompt payment of workers’ salaries and youth empowerment.

According to him, APGA was one of the best parties because of the good leadership of the governor and that of the APGA leaders. He urged the leadership to give him and other aspirants a level playground to ensure that the best candidate emerged.

Umeoji, who said he had the interest of the state and the party at heart, urged all to support him, as well as to pray that he emerged the next governor.

Speaking on behalf of the Speaker of the Anambra State House of Assembly, the member representing Awka North Constituency, Hon John Nwokoye, declared the state legislators’ total support for Hon Umeoji in the forthcoming guber election.

In his remarks, the Chairman, APGA, Anambra State, Chief Norbert Obi, described Hon Umeoji as an important stakeholder and a great supporter of the party. Obi, who said that the legislator did wonderfully well as a former Chairman of Aguata Local Government Council and in his first term as a federal legislator, assured him of the party’s support for the realization of his dream.

Pointing out that the next governor of Anambra State had been destined by God, the APGA chairman, prayed God to grant Umeoji his dream of being the next number citizen of the state.

Also speaking, the Vice Chairman, APGA, Anambra South, Chief Benneth Ibekwe, lauded Hon Umeoji for his robust and impactful representation of his constituents of Aguata Federal Constituency. He described Umeoji as a real party man, a kind hearted man and the voice of the Igbos in the federal assembly, whose goodwill was synonymous with his name, Oba.

Pointing out that every Aguata person had benefitted from Umeoji’s quality representation as a federal legislator, Ibekwe prayed God to fulfill his vision of being the next elected governor of Anambra State.

For his part, the Public Relations Officer (PRO) of APGA, Aguata LGA, Ichie Eugene Ezeobi, commended Hon Umeoji for his various contributions to the growth of the party at various levels. Ezeobi, who represented the APGA Chairman of the local government, Hon OCJ Ezechukwu, described Umeoji as a good man, a party man, and a grassroots legislator who had the interest of the masses at heart.

Adding his voice to the commendation, the Chairman, APGA, Ezinifite Ward I, Hon Chukwudi Nwankwo, described Hon Umeoji as someone who was passionate about human, community and societal development.

According to Hon Nwankwo, Umeoji fondly known as Oba Aguata, was a real party man who had empowered many people in different ways, paid for and furnished their party office in Ezinifite and provided portable water for many people in Aguata. He solicited for support from all so as to ensure that Hon Umeoji, who according to him had the interest of the masses at heart, emerged as the next governor of Anambra State.

The former Chairman, Orumba North LG Council, Hon Okey Enekwe, who spoke on behalf of the former LG Chairmen of Anambra State, described Chukwuma Umeoji as the most qualified aspirant for the governorship election. He called on the leadership of APGA to ensure that a level playing ground was provided for the party’s primary election to ensure free, fair and credible election.

The event was graced by APGA stakeholders at the state, senatorial, local government and ward levels, as well as many others from all walks of life.