A Proud Moment for Anambra State

Last Saturday, in far away Rome, Anambra’s son, Most Rev Peter Ebere Okpaleke, was installed a Cardinal at the Vatican by Pope Francis in a ceremony that attracted the cream of personalities from Anambra State. His elevation brought to five, the number of Cardinals from Nigeria.

The second is Francis Cardinal Arinze, from Anambra State. At 34, he became the youngest Metropolitan Archbishop in the World. He was installed a Cardinal in 1985.

The third is Anthony Cardinal Okogie from Edo State. He is Archbishop Emeritus of Lagos and was made a Cardinal in 2003. 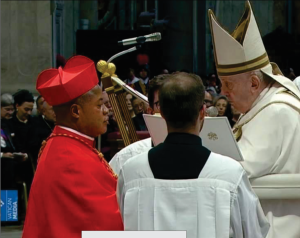 The fourth is John Cardinal Onaiyekan from Kogi State. He was the Prelate of Abuja up to 2019. He was elevated to a Cardinal in 2012.

And now Peter Cardinal Okpaleke from Anambra State is the latest. His appointment to the College of Cardinals came nine years after his Bishopric consecration. His installation has just taken place.

The installation of Peter Cardinal Okpaleke can be viewed as a victory for the Church in Nigeria, following what he went through after his appointment as the Bishop of the Catholic Diocese of Ahiara. Those were dark moments for the Church and faith as the people of Ahiara surprised the world with their unfaithfulness by rejecting then Bishop Okpaleke.

But what had followed in that aftermath was a reward for his patience and succor for his tribulations. He was immediately appointed the Bishop of the newly created Ekwulobia Catholic Diocese and recently elevated as an Arch-Bishop before shortly being installed as a Cardinal.

We rejoice with him on this momentous occasion and pray that his new position will rub off positively on the faith. We are deeply grateful to all those, including the Anambra State governor, who made out time to be with him in Rome, a gesture that showed him that he was not alone.

We also call on the faithful to learn from the experiences of Peter Cardinal Okpaleke that perseverance in times of tribulations has its just rewards.