Last week Thursday, at my place of work, Fides Media Limited, we had a very big visitor, Very Rev Fr Chuma J. Anyaka. This priest happens to be one of the finest communication experts in Awka Diocese.

He had been a priest since 1966 and has practiced journalism and communication in and outside the country. Why did he visit Fides? He had earlier visited Fides in January 2020 to build relationship and to see how the communications department of the Diocese was functioning.

Then recently, he surprised everyone with the gifts of still cameras, video cameras and many other media equipment. I was very astonished and also surprised to have seen a Nigerian with such a heart to sacrifice all he had worked to build for years to another. Fr Anyaka, that day, did not only show Fides love but he was able to rekindle  that spirit  of love through his kind gesture. 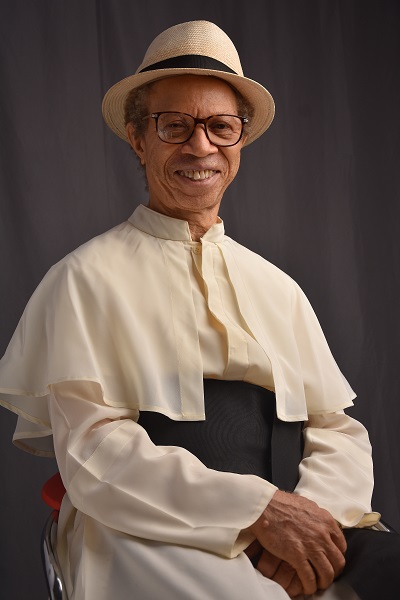 In fact, I began to search my soul, if I was capable of such exemplary lifestyle. Another Fides reporter, Miss Adejumoke Alebiosu, and I, who took him for a shot at the new Fides Media Studio, had a chit chat with him again at the Fides Director’s office before he left. Let us read him

I am from Abagana, but grew up in Aba. I went to the Junior seminary in Owerri . After that, I went to Bigard Seminary and was ordained as a Catholic priest  in 1966, a year before the civil war began in  1967. I went to war as a Chaplain. After the war, I was sent to Ekwulobia parish.

After some time, I gained admission to study Mass Communication at the University of Nigeria, Nsukka, where I became the feature and photographic editor. I had my own dark room where I fixed pictures after every event. When I left UNN, I went to teach at the Institute of Management and Technology (IMT), Enugu.

I initiated the first newspaper that was published in that department in IMT. In fact, most of our reports led from one revolution to another because we did more on investigative reporting. I left IMT for my master’s degree in communications at Fordham, a Jesuit university in New York. More so, I added Economics to that, covering one year in Micro and Macro Economics.

I came to understand that in reporting, economics lies deep into the root of human life. In my second year I had a lecturer who advised me to continue with communication, instead of swerving from communications to economics. Then I went to New York University and graduated with a PhD in communication in 1986.Since then I have taught, worked in parishes, high schools for 25 years and now, I am retired.

Fr why did you choose to study communication?

I think anyone involved in the mission of Christ must be a good communicator. When I came back from the States, I decided to set up a communication outlet in the diocese which eventually did not work out.

We have been in the business of messaging and I thought that communication is very good for anyone who wants to master messaging techniques. As we advanced into the study of communications, we began to see how we communicate with the technology and renovation around us.

Messaging is critical and for one to be a good preacher he must be a good communicator. Christ never had cameras, but he used parables to paint pictures of what he wanted us to understand. Again, you can’t be a priest without communicating, your way of life is a means of communicating to others. You may not be aware, but your life is a message to people you pasture.

How Do You See Fides Media As A Mission-Owned Newspaper And Any Other Media Oulet Out There?

The whole church has one mission which is anchored on the mission of Christ. That is why every Diocese should have a mission statement which reflects that mission, and manifest it through its media. This distinguishes a mission-owned newspaper from others.

How Do You Evaluate Yourself As A Communicator?

I know that I love communications. When I was in Bigard Seminary, I introduced a magazine known as ”Bigard Times”. We published this within the seminary. It helped us to communicate amongst ourselves and it helped the staff to understand the feelings of the students. When I got to IMT, I excelled. Throughout the period I spent at UNN, I was also productive.

Looking at your journey in Communication, what is your advice to younger Journalist?

We are called gatekeepers. That means that whatever information we allow people to read or see is what they have. In that sense we in one way or the other control people’s thinking. That means, we should help in shaping the minds of people positively. Young journalists should investigate properly and go for the truth. Do not be afraid to tell the truth and stand by it.

One Thing You Love So Much In Fordham, New York State University and UNN?

Well, in terms of academic rigour, the three universities drilled me to be thorough. In Fordham, I learnt to be more critical and objective with my thoughts. One of my lecturers at Fordham, Prof. John Feller, always drilled us to present our arguments, even if you are right or wrong, just make them convincing. In terms of social life, I socialized more and bonded better in New York University.

Were there any challenges you faced in your journey as a communications expert?

The ability to present and defend my argument.