A Notorious Internet Fraudster has Bagged a long jail term in Uyo.

EFCC operatives apprehend Olatunji on March 20, 2019 and arraigned him on July 2, 2019 on 45-counts charges bothering on identity theft, conspiracy and money laundering.

Between January 2017 to October 2018, the convict conspires with four others to fraudulently acquire the total sum of N525,172,580 through business E-mail compromise and identify theft.

On May 15, 2018 he sent an Email to one Monica Goulmeon a the charity association providing for girls & boys in Kobane with a football pitch, while impersonating a certain Rvan Omdal, a former Norwegian Football Association President, demanding the sum of €64,000 to be transferred to him.

Olatunji however, pleaded “not guilty” to the charges. 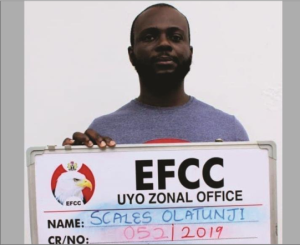 Discharging judgment on Tuesday, 28th June, Justice Agatha convicted Olatunji on all the 45-counts charges preferred against him by EFCC operatives.

The prosecution also established the guilt of the defendant in the offence of cyber crime as it related to count six to 45 of the charges.

The court ordered that the money in the convict’s account to be forfeited to Norwegian citizens through the EFCC. Also, two of his houses in Lagos State are to be sold by the EFCC and compensate Nigerian affected citizens.