A New Madness in Town

On Saturday, September 3, many Nigerians, especially those in Anambra, were shocked to the marrows when videos of a sex romp began to circulate on social media involving some young men and women who engaged in open sex at the poolside of a hotel in Ifite, Awka.

Prior to the event, a banner had been seen on same social media advertising a party in which participants were asked to come in their night wears.

But they not only came in such clothing, they were filmed openly having sex by the poolside by other attendees.

Fides checks revealed that such sex romps in the guise of parties are not new in town as such are becoming the norm. The one in question was only known because there were no phone restrictions which led to the lurid videos and pictures being exposed.

We find this new trend very reprehensible and something that should not be allowed to continue. It is obvious that girls involved in that despicable act were drug users, while it is very likely that some of the young men were potential Yahoo Boys and Yahoo Plus, as internet fraudsters and money ritualists are now known.

Whoever they are and whatever informed their action, we posit that such cannot be condoned in this state, given the disastrous negative influence it will have. 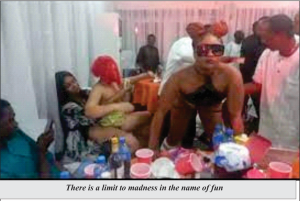 We cannot be talking about rebuilding our society while such bestiality happens in broad daylight. We find this very disgusting and appalling. We also believe that what happened mirrors the kind of permissiveness that our society allows today. A society where programmes like Big Brother Naija are celebrated should not express surprise when what happened at the Ifite Awka hotel takes place. We are indeed in a society where prized values have gone out of the window and inanities are celebrated.

We urge the Anambra State Government to launch an investigation into this matter and also identify the role played by the hotel which accommodated such an action and mete out appropriate sanctions. Hotels should really be mindful of the kind of activities they allow in their premises. This is so because hotels have lately been places where all manner of crimes are committed and places where all manner of dubious characters are seen.

While hotels and some other public places are free to do their business, some of their businesses have to be regulated, especially the one in question.

This kind of anomaly should be nipped in the bud before it escalates.