A Modern Tradition: Papal Letters of Resignation in Case of Impairment

Pope Francis’ revelation that he had signed a letter of resignation in case he became too ill or infirm to continue as pope made headlines around the world.

But in the same interview, with the Spanish newspaper ABC, the 86-year-old pope noted that St. Paul VI had written a similar letter.

And the postulator of St. John Paul II’s sainthood cause, Msgr. Slawomir Oder, in 2010 published the letters Pope John Paul prepared in 1989 and in 1994 offering the College of Cardinals his resignation in case of an incurable disease or other condition that would prevent him from fulfilling his ministry.

Still, both St. Paul VI and St. John Paul continued to serve as pope until the day of their death, saving the College of Cardinals and the church’s canon lawyers from trying to figure out who would decide when it was time to invoke the letter’s provisions and how.

Pope Francis’ letter has not been published. In fact, he told ABC in the interview published Dec. 18, 2022 that he had given the letter in 2013 to Cardinal Tarcisio Bertone, then-secretary of state; he said he assumed it was passed on to Cardinal Pietro Parolin, who succeeded Cardinal Bertone.

Canon law states that a pope can resign, but it stipulates that the papal resignation must be “made freely and properly manifested” — conditions that would be difficult to ascertain if a pope were already incapacitated.

Although Pope Benedict XVI was clearly not incapacitated when, in 2013, he became the first pope in almost 600 years to resign, even his announcement raised doubts and questions in the minds of many Catholics. 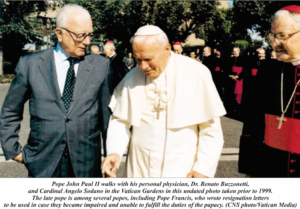 Church law prescribes no formula for such an announcement. It simply says: “If it happens that the Roman Pontiff resigns his office, it is required for validity that the resignation is made freely and properly manifested but not that it is accepted by anyone.”

But the power of precedence could mean that a future pope who resigned while in full health would use wording similar to Pope Benedict’s. Speaking in Latin to a formal gathering of cardinals, he had said: “Well aware of the seriousness of this act, with full freedom I declare that I renounce the ministry of Bishop of Rome, successor of St. Peter, entrusted to me by the cardinals on 19 April 2005, in such a way, that as from 28 February 2013, at 20:00 hours, the see of Rome, the see of St. Peter, will be vacant and a conclave to elect the new supreme pontiff will have to be convoked by those whose competence it is.”

In drafting his letters five years apart, St. John Paul referred to the letter written by St. Paul VI and dated May 2, 1965.

Pope Paul said he was writing, “aware of our responsibility before God and with a heart full of reverence and of charity, which unite us to the holy Catholic Church, and not unmindful of our evangelical mission to the world.”

“In case of infirmity, which is believed to be incurable or is of long duration and which impedes us from sufficiently exercising the functions of our apostolic ministry; or in the case of another serious and prolonged impediment,” Pope Paul wrote, he renounced his office “both as Bishop of Rome as well as head of the same Holy Catholic Church.”

St. John Paul’s 1994 text, included in Msgr. Oder’s book, said he had prayed and reflected long on what a pope about to celebrate his 75th Birthday should do as far as making provisions in the event of “an incurable illness or impediment such as to hinder the exercise of the duties of the successor of Peter.”

Undergoing surgery in 1992 for the removal of an intestinal tumor, he wrote, made him think that “the heavenly Father might have wanted to take care of the problem himself” in advance of the pope becoming incapacitated. “But it was not the case.” The tumor was benign.

So, the text continues, “following in the footsteps of my predecessor, I already have put in writing my will to renounce the sacred and canonical office of Roman Pontiff in the case of infirmity that is presumed incurable and prevents the exercise of the functions of the Petrine Ministry.”

“Outside of these hypotheses, I feel a serious obligation of conscience to continue to fulfill the task to which Christ the Lord has called me as long as, in the mysterious plan of his providence, he desires,” St. John Paul’s 1994 text said.

Pope Francis’ reaction to the publication in 2018 of Pope Paul’s letter hinted at a similar inclination to prepare for the worst, but to let God decide.

In the preface to a book in which the letter was published, Pope Francis said it filled him with “awe” for St. Paul VI’s “humble and prophetic witness of love for Christ and his church.”

“In the face of the tremendous mission entrusted to him, in the face of protests and a society undergoing vertiginous change, Paul VI did not withdraw from his responsibilities,” Pope Francis wrote. “What was important to him were the needs of the church and the world. And a pope impeded by serious illness could not exercise the apostolic ministry with sufficient effectiveness.”