A Look at the Igbo Presidency Project

Although we are yet to get much official confirmation, already many Ndigbo believe that the likes of Senator Orji Uzor Kalu; Gov Dave Umahi of Ebonyi State; former Senate President, Ayim Pius Anyim; former Imo State Governor, Rochas Okorocha; and recently, former Anambra State Governor, Peter Obi, are the early runners in the race to become the next president of Nigeria of Igbo extraction.

This is coming at a time when even the dumbest Nigerian knows that it is the turn of the South East to produce the next president of the country, having waited for long until every major zone had occupied the seat. Thus, on paper, it seems done and dusted that Ndigbo will produce the next president after Muhammadu Buhari, the incumbent president, who is from the northern part of the country.

But that scenario is being threatened by the desire of some people outside of Igbo Land to vie for the coveted seat and some of them are former Lagos State Governor, Bola Ahmed Tinubu; former Vice President, Alhaji Atiku Abubakar, and recently, former House of Reps speaker, Alhaji Aminu Tambuwal, among others.

While Tinubu, the godfather of Lagos politics, is from the west, the other two are from the north. Last time out, Atiku Abubakar ran for the presidency with our own Peter Obi as his running mate. 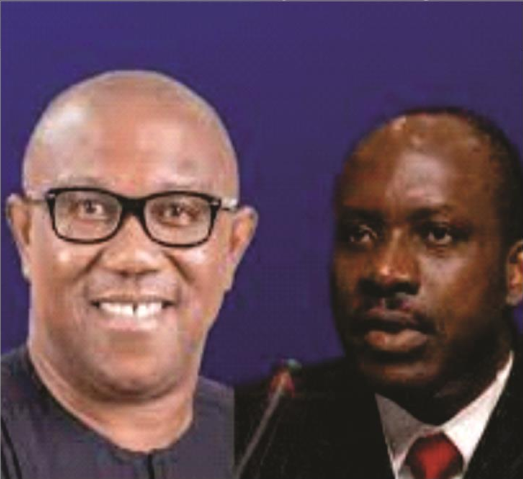 But this time that it is clearly seen as the turn of the South East Zone to produce the president, some actors are trying to pour sand into our garri, so to say. And I consider their moves as insulting and disrespectful.

Only those who do not like us will be attempting to deny us our position and this is the best time to know who likes us or not. Although I’ve always argued and believed that producing a president of Igbo extraction will not solve our problem, we should be nevertheless giving it a try so that when the modern history of Nigeria will be written, it will be on record that Ndigbo also once occupied the number one seat in Aso Rock Villa.

On this note, who is best fitted to represent the Igbo in the coming race? From the feelers around the Igbo Nation and even beyond, there is one man whom people have been clamouring for and that man is Peter Obi.

Now, regardless of how one views or perceives him, Obi is readily the best among the known crowd that the Igbo Nation must endorse if we want to be taken seriously by Nigerians. In Obi, you see a man different from the crowd without being a saint.

He sees governance as serious business, does not play to the gallery and has no tainted baggage; the chief reason why eight years after he left office as governor, no agency has been able to pin any monkey business to him. This is a rarity in our parts. Obi himself recently disclosed that he would contest the presidential election if his party, the People’s Democratic Party, PDP, zoned its presidential slot to the south, rather than leave it open.

Before his statement many Nigerians had besieged his social media handles, urging him to come out. In him they see somebody who is sincere in his aspiration to serve his country and one who is markedly different from the rest and I agree.

But then being good in Nigeria may not be enough to get one the favours sought. The reality of the Nigerian nation, as far as politics is concerned, is that the system frustrates its best and encourages its worst. Governing Nigeria is much tougher than governing Anambra.

In Nigeria you have the almighty northern power bloc that determines who gets what and when. Anyone who thinks this is mere empty talk must be living on another planet.

The reality remains that as it stands now, only the person anointed by those power brokers can occupy that seat, especially when they still control everything.

In Nigeria everything is skewed against the Igbo man and has been so since after the unfortunate civil war. It is as if some people are so scared of the Igbo man that they will go to any length to prevent him from ”smelling” power.

They must be thinking that once an Igbo man assumes power he will deal with them with the same cards they have been dealing with us all these long years. But then they don’t know the Igbo man. The average Igbo man has no time for sulking and settling grudges. The Igbos are a forward looking people who do not erect any borders.

That is why they are the only Nigerians that can reside anywhere in the country and develop it as though it were their own home. No other Nigerian of any ethnicity can do this.

The few seen doing business here are itinerant and are always mindful that this place is not their home. But the Igbos will go to border towns between Nigeria and other countries and establish blossoming businesses, build houses and even marry from there.

Anyone who can do this isn’t one that is not forward looking. So why the fear harboured by some people against the Igbos? Could it be that those afraid of the Igbos taking their turn to lead Nigeria are afraid of their own shadows?

But sadly, the stark and brutal reality is that those same people are standing between us and Aso Rock. As I have always noted in previous write ups, the only type of Igbo president those people can tolerate is the type they can control remotely; somebody with a skeleton in his cupboard which they will always use to silence him if he tries to resist their control. That is the major reason why the likes of Obi will not be allowed to be president. They can’t control him. They won’t trust him.

In fact, it is dangerous for any independent-minded Igbo man to preside over the affairs of the country today as those people can do anything to cut him down to size. Nigeria is not an ideal place at the moment for decent folks to take over the mantle of leadership and I would hate it for the likes of Obi to be messed up by those who see the leadership of Nigeria as their birthright.

Thus, until the system is changed for good, I would not endorse people like Obi to go and get messed up. I just do not see APC giving power to any good Igbo man; least of all allowing PDP to win. What I see playing out, as I keep saying, is a situation where the cabal in Aso Rock will be forced to pick an Igbo lackey as president if we make enough noise. But if not, they will simply foist another spent force on the country whom they will keep controlling; both body and mind, as they have been doing before now.

How I wish the Igbo Nation could just realize the need to develop our place and forget Nigeria. A well-developed Igbo Nation will not care what happens in Aso Rock or who occupies it and will only grapple with the rest of Nigerians who will be anxious to borrow our development template to be like us.

But for the Igbo Nation to begin to think of becoming self-sustaining outside of Nigeria despite remaining a part of it, great and selfless leaders ought to be elected to be our governors here and not governors who will only be feathering their own nest.

In Prof Chukwuma Soludo, Anambra seems to have got somebody who will lead the new charge for a self-sustaining Igbo race; somebody who can galvanize other South East governors into action and develop a template that will stand the Igbo Nation out from the Nigerian crowd. We have the personnel, resources and ideas. We only need a man who can bring our people together to tap into what we have in abundance and bring about the much desired change.

In Soludo, we have such a person and it is achievable because we still hold our destinies in our own hands here. In Peter Obi, we have someone who can do same at the centre only if he will be allowed, which I seriously doubt. And that being the case, the only solution is for us to look inwards for our salvation.