A Day with the Elderly Ones

Situated at a quiet and lonely street at the back of St Thomas Aquinas Catholic Church, Awka, no one will know the place exists unless one is either taken to the place or stumbles into it by chance. I’m talking about the Priests’ Welfare Home, Awka. This is a place that houses some retired priests of the Catholic Diocese of Awka who had given their best in their active years but now either resting there or convalescing from an illness. 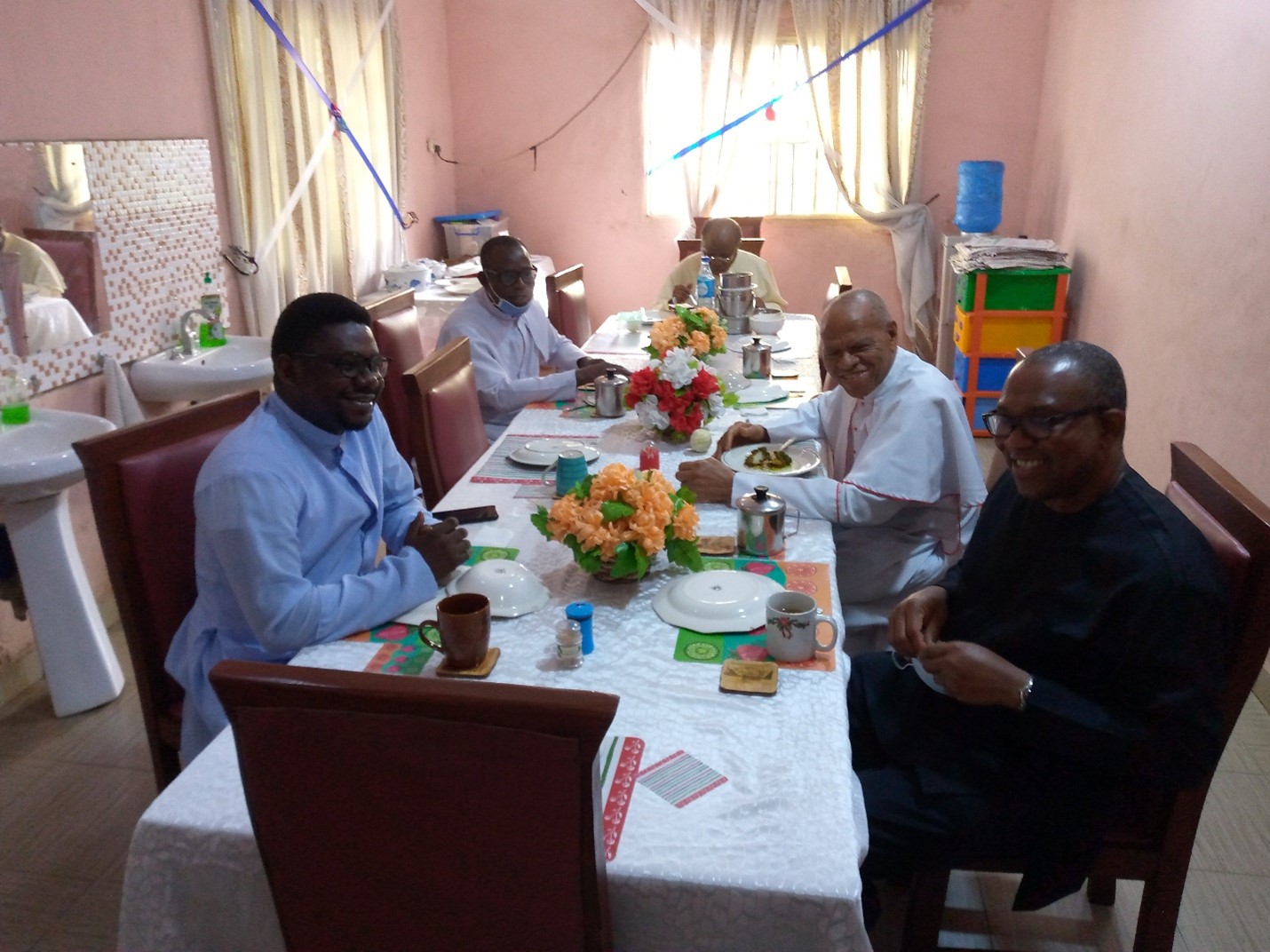 Fmr Anambra State Gov, Peter Obi, 1st right, during breakfast with some retired priests of Awka Diocese during hbis visit to their home on Monday, Jan 4, 2021. Opposite Obi is the director of the home, Rev Fr Emma Udu.

It is not often that people visit them. Yes, people occasionally visit but those who have done so have largely not been the high and mighty. But for the thoughtfulness of the Catholic Diocese of Awka, shepherded by Bishop Paulinus Ezeokafor, such a home may not have been in the consciousness of the public.

Under the watchful eyes of young and energetic Rev Fr Emmanuel Udu, the home has been quietly thriving and looking neat and well kept. It has in its care, six Catholic priests who have seen better days. To minister to them are nurses and other helpers who ensure that the place is well run.

It was here that the immediate past governor of Anambra State, Mr Peter Obi, paid a surprise visit last Monday, January 4, to share in the joy of the New Year and also have breakfast with them.

The look on the faces of the inmates spoke volumes about their happiness and admiration for the man who had carved time off his busy schedule to come and be with them.

Speaking on his motivation for the visit, Obi said it was in line with his belief that the young and the aged should be cared for, being that both were in no position to care for themselves.

He recalled how such had been one of his cardinal policies as governor which made him to seek and recognize the contributions of the likes of Chinua Achebe, Kenneth Dike, Chike Obi, among others, to society.

Obi said it was criminal to neglect the aged or not to pay gratuities and pension to retirees, and called on society not to fail in its primary role of caring for the weak and vulnerable. 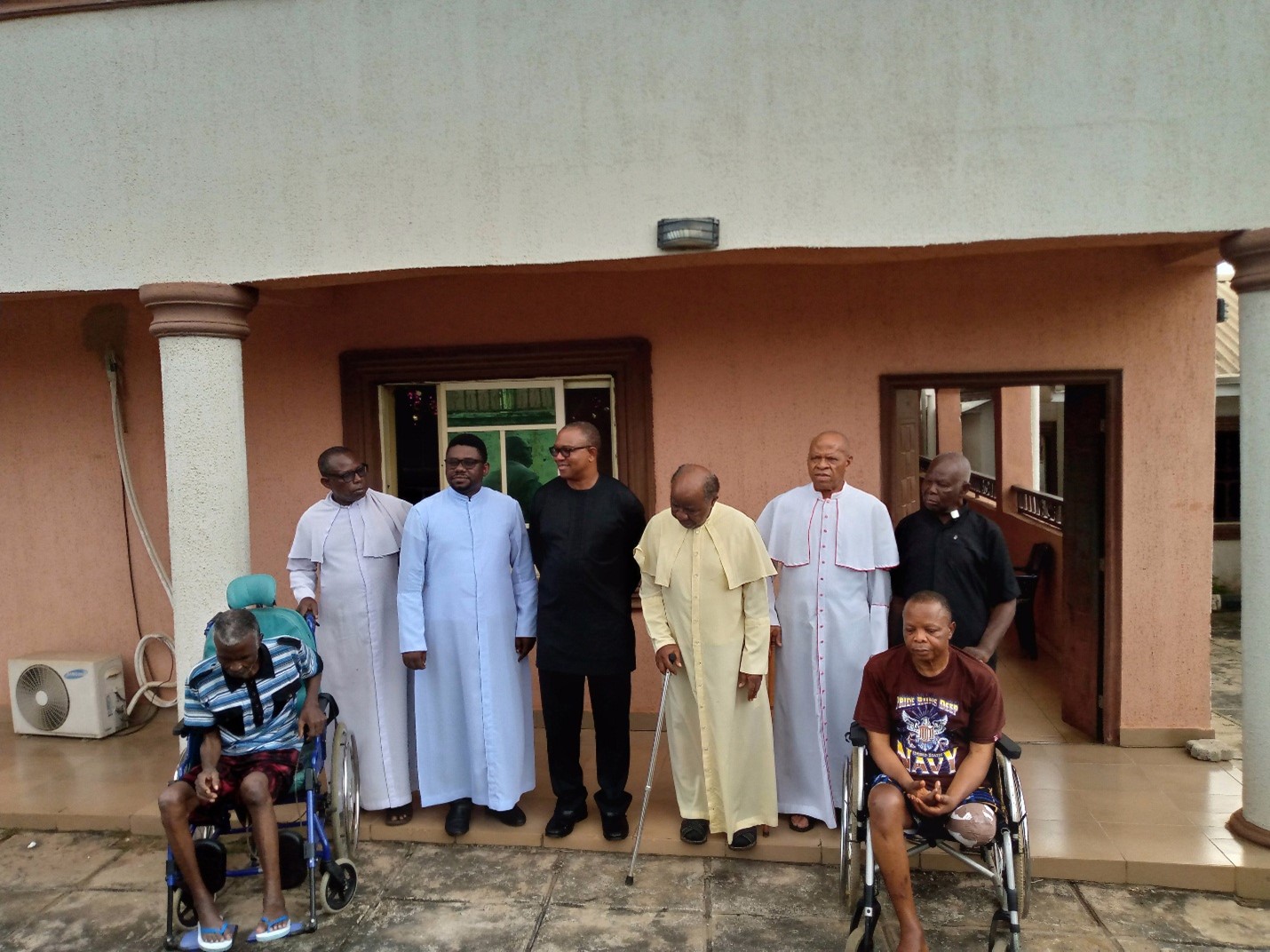 Obi with some of the old priests at Priests’ Welfare Home, Awka

Obi who celebrated mass with them and took the reading, described the encounter as part of how he had chosen to celebrate the festive period.

‘It is fulfilling to celebrate the elderly ones who had faithfully served the Church and society. It is not only morally binding, but spiritually rewarding to spend time with them, care for them and tap from their wealth of wisdom and experience,’ he said.

Obi who said he loved spending time with the elderly, encouraged the younger ones to always appreciate them for their good roles in societal development.

Recalling his association with the elderly as the governor of Anambra State, Obi said he organized birthday celebrations and took care of the likes of Prof James Nwoye Adichie, Chike Obi, among others.

‘These were elderly people who had invested their youthful ages in making society better. So I am happy to be celebrating our elderly priests today,’ Obi said.

The Vice Presidential candidate of the People’s Democratic Party, PDP, who also recalled how he spent close to 40 billion Naira to clear outstanding pensions and gratuities owed by successive governments of Anambra State since 1990, said that one of the worst crimes anyone could commit against humanity was heartlessly withholding the benefits due to the elderly; be they pensions, gratuities and so on.

Obi encouraged the priests to continue to live their lives happily and always thank God for the gift of their old ages. 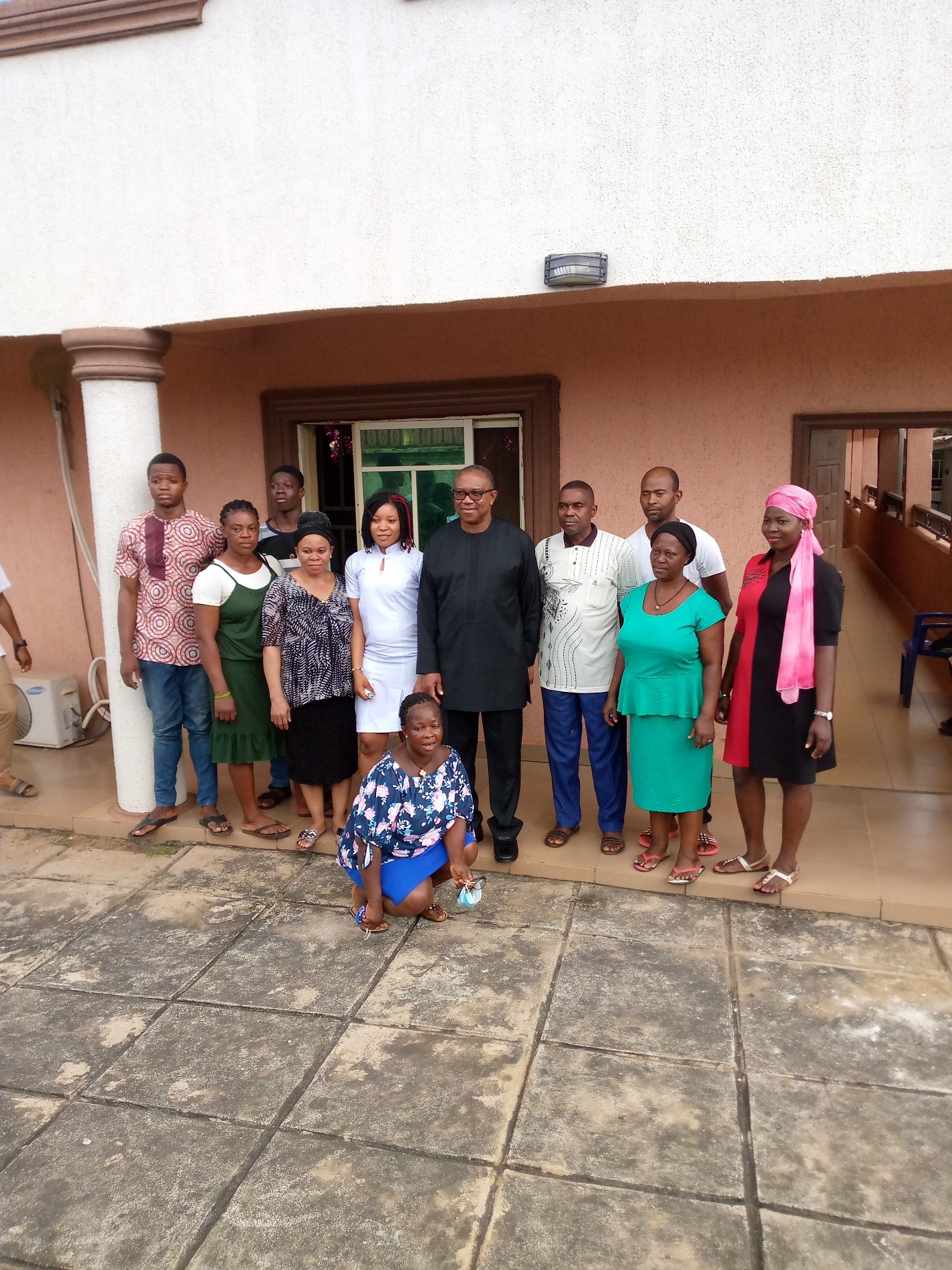 Obi poses with some workers at Priests’ Welfare Home, Awka

Appreciating Obi for what he described as an extraordinary show of love, the Catholic Bishop of Awka Diocese, Most Rev Paulinus Ezeokafor, represented by the Director, Awka Diocesan Priests’ Welfare Home, Rev Fr Emmanuel Udu, said he was not surprised by Obi’s kind gesture, as, according to him, showing love to people had become Obi’s signature.

Fr Udu encouraged Obi to keep on with his exemplary lifestyle, while praying God to bless him.

Rev Fr Emmanuel Udu described the visit as the first since the establishment of the home.

‘The priests are happy and overjoyed that somebody like His Excellency has come to be with them and have breakfast with them. It does not happen every day,’ gushed Fr Udu who also thanked the Catholic Bishop of Awka Diocese, Most Rev Paulinus Ezeokafor, for his fatherly role and support to the home.

Fr Udu said that though some people had been visiting them, this would be the first time a person of such high profile had visited them.

‘This has never happened since the inception of this place,’ Fr Udu restated.

The visibly delighted priest said they would continue to pray for more blessings for Obi.

Monsignor Amateze further described the visit of Obi as the first of its kind at the home and believed that if other politicians did like Obi did with them, society would be a lot better.