A Day in Kidnappers’ Den: A Reporter’s Diary

I spent Friday the weekend of June 10 in a kidnappers den and the experience is yet to totally leave me. It was a harrowing experience. The den was a dingy three-room affair in a dilapidating building that had a brown roof which told obvious stories of the age of the building.

If the rusty roof of the building confirmed its age, the cracked walls, which showed through dilapidation was enough evidence that the building would come down on its occupants any moment.

The three rooms oozed with stench from blood, obviously those of kidnap victims killed in the rooms for refusing to pay ransom, for paying less than demanded, or other reasons. The rooms were also filled with empty bags, female weave-ons, all manner of shoes, clothes, and diverse items. All items are suspected to belong to kidnap victims who have at one time or the other been quartered in the den. 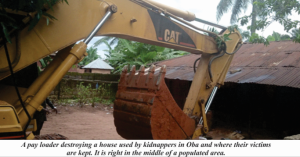 Most prominent of the items found in the den were charms used by the criminals to fortify themselves. They included a lot of objects, all looking scary. A corner of one of the rooms was used as an altar, consisting of various fetish materials. Within the compound, the criminals had another shrine, while a little away from the den, a bigger shrine could be found, decorated with white, red, and yellow pieces of clothing.

It was a disgusting sight, but I spent the day there. Was I kidnapped? No. Then, how did I spend a day in a Kidnapper’s Den?

I received an invitation to come to the residence of the Anambra State Governor, Prof. Chukwuma Soludo that Friday morning for a news coverage. I arrived at the Anambra Governor’s Lodge at 9am, hoping that by 10am, I would be out to attend to other duties. But when I parked at the car lot, I was rather ushered to a bus to join some colleagues as the coverage was not at Soludo’s residence.

The bus drove us to a police annex in Awkuzu, Oyi Local Government Area. Anyone who knows police operations in Anambra and also hears of Awkuzu, will know what it means. Awkuzu used to be the headquarters of the dreaded Special Anti-Robbery Squad (SARS), but with the disbanding of SARS, the State Police Command turned it into an annex, probably for covert operations. 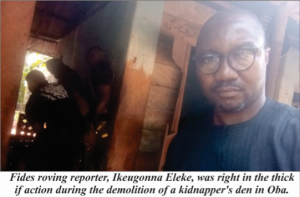 Regular users of the Enugu-Onitsha Expressway, through Awkuzu, know the annex is usually deserted, except for snipers posing on a high sentry mounted inside the building, but visible to anyone on the expressway. There are also very agile men at the front of the annex, but there is never any visible activity going on around the annex. But on this day, as we parked at the annex, there was very visible and overflowing human presence of gun toting security men all around.

There was a crack squad of police operatives, mainly from Benin. There were also operatives of the Civil Defence, carrying their long rifles, a team of soldiers; all combat ready, and an overflowing number of vigilante operatives under the name of SECAT (Security and Emergency Crack Team).

It was an intimidating convoy of over 50 cars when the team eventually set out. All thanks to my beer habit, I had within the period of waiting for movement to commence familiarized myself with a few security operatives, mostly the police personnel from SFU. As at the time movement commenced, no journalist was sure where we were going, but from drinking beer with them, I was able to decode before other journalists where we were headed.

‘As I dey here now, I’m sure of my promotion this year,’ a sergeant among the SFU team told me. He continued: ‘We are going to Oba to destroy the den of kidnappers. I was among the team that cracked that kidnap team. We killed their leader, Sampolo, arrested two suspects and also freed three kidnap suspects who were waiting for their ransom to be paid by their relatives so that they can be freed. 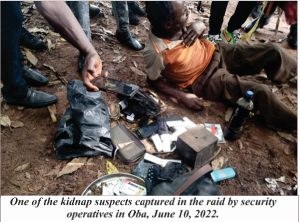 ‘One of the victims was a reverend father and his car which was seized from him after he was kidnapped was parked just in front of the compound so when we visited the den, we were able to rescue him and others. I serve in Benin. What we came for is a special operation and since after the rescue, the names of those who participated in the operation have been sent to Abuja. My promotion go come this year be that ooo,’ he happily told this reporter, who remained anonymous in the discussion.

Through other interactions with some operatives with whom we drank and waited for movement to commence, it was learnt that the aim of the day’s operation was to hit the den and find out criminals who may have converged on the den and also to destroy it in line with the state government’s policy of destroying any property used to hide criminals or keep kidnap victims.

Two of my colleagues who I told we were going to visit the kidnappers den panicked and told me it was risky. Of course, it truly was, especially as we were invited without prior information of where we were going, while we accompanied gun totting security men with bullet proof helmets and vests. For me, I had been desirous of such adventure and longed to investigate the insecurity in the state, but every possible account I had given in previous reports was a third-party account.

We arrived in Oba a little before noon in a long convoy. Upon arriving at the earlier busted den, criminals shot at the team, but when security operatives replied with a torrent of bullets and physically pursued them, they escaped through their backyard.

Unlike stories that have been told of unknown gunmen living in the forest, the busted den was right in the centre of a village in Oba, with surrounding houses and neighbours all around.

Three suspects were however arrested from adjoining buildings, mostly for cases of complicity. While one was freed after successfully identifying herself and her employers vouching she was their staff members, two others, including a suspected native doctor who manned the shrines used by the criminals, and another suspected to be a member, were taken away.

The team remained in Oba all through the day, combing the neighbourhood and profiling some residents of the area to ascertain their identity. It was such a shock to some of us who have heard stories of the criminals, believing that they lived in bushes, but here was a house right in the middle of a densely populated community being used to keep kidnap victims.

Apparently, kidnap victims kept in the place are kidnapped from other places and brought to the area blindfolded, accounting for the reason the victims never get to know where they were, just as they are also taken away blindfolded once it is time to free them after ransom has been paid.

The highpoint of the visit to the den was the demolition of the house, but it took a long while for the authorities concerned to bring a pay loader for the demolition, but while the pay loader was awaited, security operatives continued profiling. One African wonder that surprised all was when some of the fetish materials discovered in the shrines were to be taken away.

A small round local calabash which had ropes tied all round it was brought out for destruction to know what it contained, but the small calabash defied attempts to break it. First, some policemen used cutlass on it, but each attempt to hit it saw the small calabash shifting position and avoiding being hit. An axe was also used on it, but no result was achieved.

Some security operatives decided they must destroy it and decided to use a rifle on it, but each shot at it saw the small calabash shifting position. It didn’t seem real at all that not even an AK47 riffle could burst open an ordinary calabash. One of the vigilante operatives then demanded to be handed the calabash. He turned his back on everyone and muttered a few words, dropped it on the ground and pointed his gun at it. He pulled the trigger and immediately, the calabash shattered into pieces.

The pay loader arrived afterwards, and capped the operation with the demolition of the house, the shrines, and another house still under construction by the bandits. That capped a successful operation, as the team departed the area at about 7pm.

Gradually, Prof. Soludo, in conjunction with security operatives are winning the war against criminals in Anambra.