A Case for Keke, Okada Riders

Last weekend, the Anambra State Government, through the deputy governor, met with representatives of commercial tricyclists, otherwise called keke drivers, at Dr Alex Ekwueme Square, Awka, in response to the downing of tools by the keke operators on the 22nd and 23rd of September. It was a development that caused severe hardship on commuters, many of who had to trek to their offices in the morning and to their homes in the evening. The keke operators were protesting against the N15, 000 monthly levy imposed on them by the state government; something they described as a heavy yoke.

A major fallout of their strike was the hardship that commuters went through which brought to the fore, the important place of keke operations in the state, just as the banned okada (commercial motorcycle) business.

While we appreciate that the Anambra State Government really needs to raise funds for the implementation of its programmes in the state, we also recognize the difficulty the common folks in the state are going through. Many of these people can be found among keke, shuttle bus and okada drivers. Many of them operate their vehicles on hire purchase, meaning that they have a specific amount of money they return either daily or weekly to the owners of their vehicles.

Just as they noted that the said N15, 000 was too much for them to pay to the government, we agree no less. We suggest that government should meet with their union and arrive at a mutually agreed levy that will beneficial to both parties. We are therefore happy that both parties have already met and we can only hope that an amicable solution will be found. 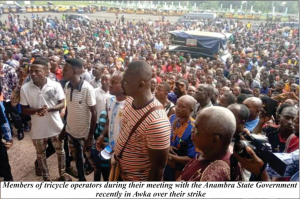 Another issue we want to revisit is that of okada operations which have been banned in the capital city, as well as in the commercial city of Onitsha. Much as we appreciate the reasons by government for ordering the ban, we are also looking at the negative fallouts of that ban. There is no doubt that the ban on the operations of okada led to an immediate increase in the rate of crime which was part of the reasons for banning them in the first place.

The ban has also affected commuters, especially those living in hard to access areas where tricycles or shuttle buses cannot get to.

Our take is that the ban be applied only on major roads in the capital cities of Awka and Onitsha; while the okada operators can do their business in streets, just as they do in many rural communities.

Stringent security measures should be mapped out by the government to ensure that commercial motorcyclists are well monitored, such as wearing of special vests with numbers for ease of identification. Under this, anyone not wearing such will be arrested and prosecuted. If, indeed, okada operations have been going on in the villages without serious security threats, they can also go on in the major cities.

Our stand is predicated on the hardship faced by many of these people who cannot upgrade to either keke or shuttle buses because of poor finances. It is believed that some of them who cannot upgrade are those who have taken to crime and this leaves more problems than solutions in the fight against crime.

The times are dire for many at this time and all efforts should be made to ameliorate the plight of the downtrodden, even as we hope and pray that the state government will succeed.