A Bitter-Sweet Moment for Sports in Nigeria

The week that ended a few hours ago was indeed a bitter-sweet one for lovers of sports in Nigeria because two contrasting events inevitably produced a scenario which can best be described as pleasure tingled with pain and sadness.

The two events in focus happened almost simultaneously on Thursday, September 15 in Abuja. Inside Aso Rock, Nigeria’s seat of power, President Muhammadu Buhari, despite his congested schedule and seeming apathy towards sports, played host to members of Team Nigeria to the 2022 World Athletics Championships in Oregon, USA and the Commonwealth Games in Birmingham.

An elated President Buhari showered Team Nigeria with a whopping sum of N200m and National Honours for 13 athletes who had won gold medals at the two global competitions.

While Nigerian athletics poster-girls, Tobi Amusan and Ese Brume and other gold medallists smiled home with the prestigious award of Officer of the Order of the Niger (OON) plus N4.5m cash reward each, silver medallists received N2.5m while bronze medallists got N1.5m.

Considering the heroic deeds of the athletes whom President Buhari aptly described as national heroes and heroines, it was money well spent. Indeed, by their superlative performances made possible by hard work and dedication to national service, the victorious athletes ensured the national anthem of Nigeria was played 13 times-once in Oregon and 12 times in Birmingham. 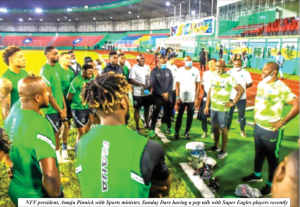 It would be recalled that at the world Athletics Championships, Tobi Amusan, stunned the world with her electrifying pace in the 100m hurdles event for Nigeria’s first ever gold medal in world athletics, after which the Nigerian national anthem was played an unprecedented 12 times in Birmingham during the Commonwealth Games.

As we continue to celebrate the victorious athletes who brought undiluted joy to millions of Nigerians, we must not forget to acknowledge the positive and invaluable contributions made by the Federal Government through the Ministry of Youths and Sports Development by ensuring that Team Nigeria prepared adequately for the international competitions.

Worthy of mention here is the Adopt -an-athlete initiative of the Minister of Sports, Sunday Akin Dare, which has already seen at least 44 elite athletes adopted by three State Governors, a Deputy Governor, some philanthropists and corporate bodies.

Despite space constraint, it is imperative to mention that Governors Ifeanyi Okowa Delta, Godwin Obaseki (Edo) and Dapo Abiodun (Ogun) are the three sports loving Governors who immediately keyed into the laudable initiative.

When public spirited individuals and corporate organizations answer any clarion call, they too must be celebrated. So, this is a modest way to appreciate the aforementioned for their immeasurable contributions to the success of Team Nigeria.

It is, therefore, expected that the Adopt-an-Athlete initiative which has brought smiles to the faces of Nigerians will be sustained to outlive its initiator. In a few months, the present minister of sports may leave office but the programme must be sustained for Team Nigeria to continue to enjoy the individual and corporate sponsorships that have contributed substantially to today’s joy.

However, while Team Nigeria’s  athletes and officials were still savouring their bounties at the Presidential Villa, the devastating news about the suspension of the 2022 Nigeria Football Federation (NFF), Elective Congress emanated from a law court in Abuja to foul the celebratory mood.

A Federal High Court in Abuja, presided over by Justice Inyang Ekwo, had issued an order restraining the Minister of Sports, Sunday Dare and president of the Nigeria Football Federation ((NFF), Amaju Melvin Pinnick, from conducting the NFF Executive elections scheduled for September 30, 2022 in Benin City, Edo State.

Aggrieved football stakeholders Harrison Jalla, Chief Rumson Victor Baribote, Austin Popo and National Association of Nigerian Footballers (NANF), who are 1st to 4th claimants respectively had approached the court on September 2 seeking an interim order restraining the defendants, in this case, the Sports Ministry and the NFF, their agents, employees, staff, officials,  or electoral committee from conducting election into any executive office of the NFF pending the hearing and determination of the motion.

The claimants who have been having endless battles with the present leadership of the NFF are obviously unhappy with the undemocratic manner the football federation is being constituted which is depriving majority of the stakeholders from having a say or contributing to the development of football in the country.

In view of the fact that Justice Ekwo has already adjourned the case to October 30, it will be practically impossible for the eagerly awaited September 30 NFF elective congress to be held as planned, if the court order isn’t vacated.

This is indeed another major setback for Nigerian football. Although the  latest impediment to football development may have come as a surprise to many, those of us who sighted the writing on the wall and were able to read and comprehend can only say, we saw it coming.

What has happened is nothing but a well-timed bomb that has just exploded as intended. When the leadership of the NFF willfully excluded critical stakeholders like NANF from the last congress in Lagos, it was clear to discerning minds that Pinnick was hatching a plan inimical to Nigerian football. He was and is not committed to the 2022 NFF election. The CAF and FIFA Executive Committee member wants a third term so badly. No one should be deceived that he has dropped his ambition.

Although one isn’t supporting those who quickly head to conventional law courts to seek justice, it is necessary to say that depriving a key component of football like the players union from participating in any election, let alone of winning, is a call to anarchy. This is what is looming large in Nigerian Football at the moment.

I feel so sad for those genuine football stakeholders who had put in so much effort in their bid to see the back of maverick Pinnick who is bent on finishing what is left of Nigerian football.

But all hope is not lost. If those who are truly desirous of the much needed revival of Nigerian football will be more tactical in diffusing the landmines planted by unrepentant adversaries, then football in Nigeria will survive the latest onslaught.