9 Months After, Unizik Returns to Life

As tertiary institutions resume after over 9 months of closure owing to the prevalence of the coronavirus pandemic and subsequent industrial action by the Academic Staff Union of Universities, ASUU, Nnamdi Azikiwe University, Awka, has begun bubbling again with an appreciable number of students seen around the university environs.

Fides crew, which visited the university, January 21, on a mission to ascertain the level of activities in the university, COVID-19 protocol compliance and also, how service providers fared during the period students were not around, observed at the Garba Square, students clustered in their hundreds reading, while lectures and other academic activities were yet to resume. Security operatives were also on ground doing their job. 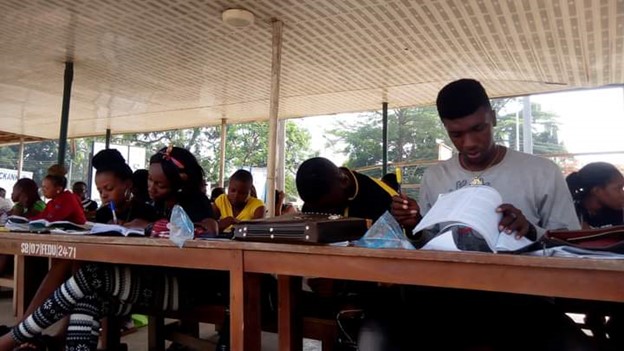 Students at Garba Square, Nnamdi Azikiwe University. They are without face masks; an outright flout of COVID-19 safety protocols.

Fides also reports that there was an alarming number of students who appeared unaware of the most basic COVID-19 protocol – wearing of face masks, as the number seen wearing face masks could be easily counted.

Service providers on the other hand, had returned with hopes for positive turn around. Those who spoke to Fides reported dire hardship when the 2019/2020 academic session was paused, with students who form their largest customer base, not on campus.

A photocopy machine operator within the university environment, Uju Nwome, who shares a space with her husband, a binder, told Fides that she resorted to some other side businesses, including selling snacks and soft drinks, which she sold to a few persons who strolled into the school environment just to pull through the hard times.

Also, Destiny, a makeup artist, who also sells kits for makeup, said she resorted to seeking clients outside the school. This, she noted, was her form of survival. She added that the return of the students meant a boom for her business as students would resume patronizing her. She said, unlike the time of the pandemic, she would have enough money to save.

For his part, Mohammed, a tricycle owner who operates within the school, said he did not hesitate to return to his main business of selling food stuffs. He said he did not feel much hardship in the period of the pandemic as his other business did not dwindle.

He added that his reason for not driving his tricycle into Awka Town was that he would be required to pay the registration fee of between 45,000 to 50,000 Naira, against about 8,000 Naira which they paid for registration to operate within the school, Commissioners’ Quarters and Agu Awka.