In its further sustenance of the vision of all round proper formation of the students through quality education, moral and exposure, the famous Catholic Diocese of Awka-owned Tansi International College, Awka (TICA), Anambra State, recently made an international education excursion to the United Kingdom.

The education excursion which was on the invitation of Oxford University, United Kingdom, and lasted from 7th – 12th November 2022, was the seventh international education excursion made by TICA since its inception in 2015, and with Fr Onyebuchi as the principal. 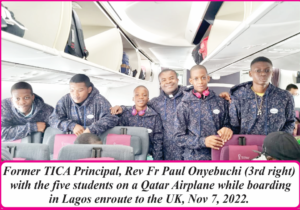 Five students of the College, Alexander Ebubechukwu Nebolisa, JS 3; Chukwudubem Ferdinand Okafor, SS 1; Natthaphat Ikwuezunma, SS2; Emmanuel Ebuka Onika, SS 3 and Chidubem Lawrence Onyeanusi, who graduated in 2020, and is currently a student of University of Nigeria, Nsukka, represented TICA in the excursion. The students were led on the trip by the immediate past principal of the College, Rev Fr Paul Onyebuchi, who had earlier planned the travel.

It will be recalled that TICA had after its education excursion to the United Nations in New York, USA in 2019, planned to tour the United Kingdom next. But due to the COVID-19 pandemic, the excursion was delayed till November 2022. 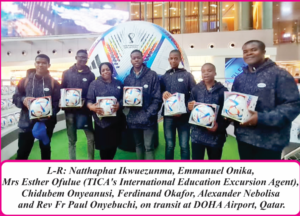 Sharing their experiences, the students and their former principal, described their experiences as exciting and thrilling. The TICA UK ambassadors, who said they successfully arrived at Heathrow Airport, London, on 7th November, revealed that they had many enriching lectures for five days, and visited many historic places in the United Kingdom.

Among the places visited by the team were the Oxford International Study Centre; the Christ Church; Oxford City, England which was founded on 4th November 1546 and the Christ Church College, where they watched a Harry Potter movie. 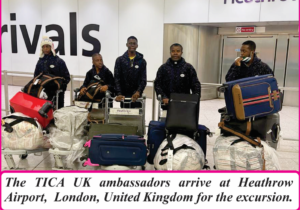 In an interview with the press, the former principal, Fr Onyebuchi, described the 2022 Education Excursion as unique. According to him, the team members were shared and hosted by four different British families whom they stayed with and shared experiences with. It was a sharp departure from previous tours during which they either lodged in hotels or in rented apartments. 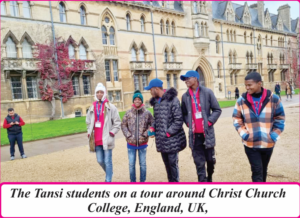 Other lectures, according to the team, were on the ”History of Education in the United Kingdom”, ”Stress management (how to avoid depression) and traditional and cultural issues”.

Fr Onyebuchi, who is currently the parish priest of St Patrick’s Parish, Aguluzigbo, Anaocha LGA, Anambra State, said he enjoyed the lectures he had on leadership and management. The Catholic priest, who described the UK Excursion as one of his best experiences, commended the proprietor of TICA and the Catholic Bishop of Awka Diocese, Most Rev Paulinus Ezeokafor, for his support, which, he said, facilitated the college’s educational trips abroad, from 2015 till date. 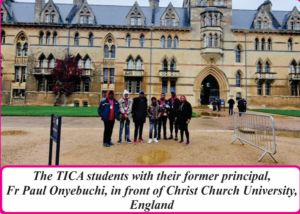 Rev Fr Onyebuchi appreciated Mr Patrick Belonwu, a native of Uga, Anambra State, who, he said, hosted them in his house after they left Oxford Study Centre, and gave them a treat with many local Nigerian foods.

Also in an interview, one of the students, Chidubem Lawrence Onyeanusi, who is currently a student of the University of Nigeria, Nsukka, said he was delighted over the tour, saying that they learnt a lot from the lectures.

Onyeanusi, equally said they visited the Christ Church College, the Ashmolean Museum where they saw some ancient Egyptian sculptures, Magdalene College and River Dems, which he said, were referred to as four landmarks of Oxford City, United Kingdom. 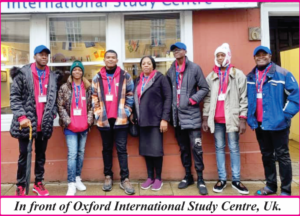 For his part, the youngest of the team, Alexander Ebubechukwu Nebolisa, JS 3, who shared his experiences on how they learnt how to make pizza and be responsible individuals from one Mr Belonwu, described the excursion as memorable.

The students thanked their parents and the School Management for the opportunity which they gave them to be part of the excursion, and hoping for more such experiences. 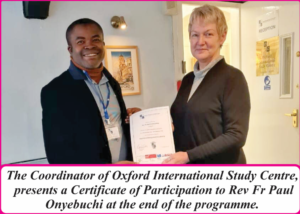 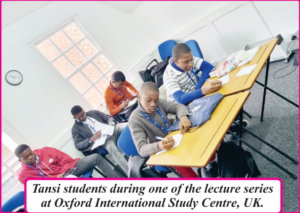 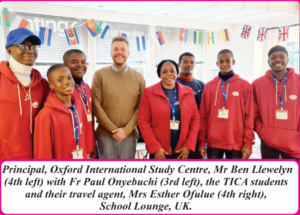