This is even as the Bishop at the 2021 Priestly Ordination, charged the new priests to focus on the salvation of the congregants and not on providing material support to relatives, noting that this could be a distraction to the calling of a priest. 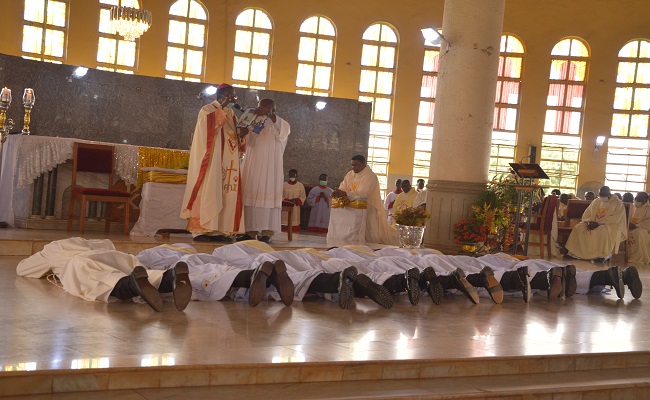 The ordaining prelate, Most Rev Paulinus Ezeokafor (standing left), blesses the ordinands for the priestly/diaconal ordination as they prostrate for Litany of the Saints during the ordination rites, St Patrick’s Cathedral, Awka, July 17, 2021.

Others who were ordained for the Society of Catholic Apostolate (SAC) Congregation were Rev. Frs Stanley Muokwue, of Our Lady of Seven Sorrows Parish, Umuoji; Rev. Christian Mba, of St Theresa’s Parish, Umuida, Enugu-Ezike; and Cornelius Agajere, of St Dominic’s Parish, Mbaukwu.

The ordination at which the first priest of Ezinato descent, Fr Okoli, was ordained, also featured the diaconal ordination of Ezinato’s second deacon, Rev Ekene John Paul Nweke, for the Catholic Diocese of Klerksdoorp, South Africa. Rev Nweke’s priestly ordination  is expected to hold in December  2021.

In an explanation provided by the bishop on the need for the ordination of priests, the diocesan Chief Shepherd told the congregation that Christ in the New Testament empowered his disciples who were not immortal, to raise other priests. 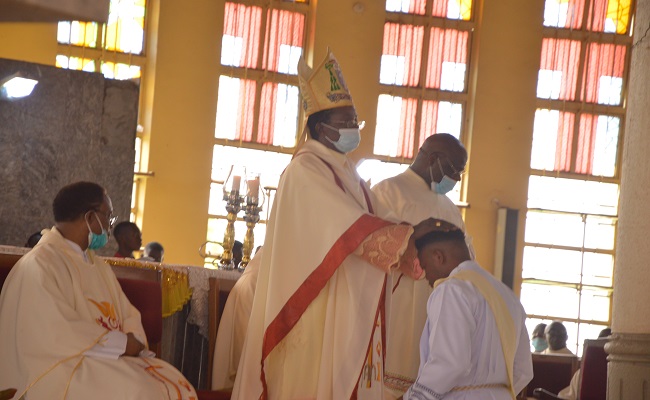 Laying on of hands on one of the candidates for priesthood by Bishop Ezeokafor during the ordination rites.

Bishop Ezeokafor in his homily during the ordination, told the newly ordained priests that their call was unto selfless service and they were to wholly submit to the bishop and the Mother Church.

The Catholic prelate urged them to follow the doctrines and procedures of the Church in the discharge of their priestly duties and not seek to do things their own way.

He recalled that the years of formation for a priest were at least fourteen, noting that it was necessary because a person who would lead others required intense training and development to be armed with requisite capacity.

‘Before proceeding to the senior seminary, one is expected to pass the senior secondary examination in their country. Priesthood is not for people who have failed to show ability to study, yet claim to have been called by the Holy Spirit,’ the Bishop explained.

He reminded the congregation that service to the Church required consummate time, even as God required that we had knowledge of the things around us and the things above. He beseeched God to uphold the new priests.

Addressing the congregation at the ordination Mass, the bishop said the priests did not fall from heaven but rather, from societies where they had relatives.

His words: ‘Even though they are ordained priests in the Order of Melchizedek, they are not Melchizedek because they have parents and siblings.’

He appreciated the families, sponsors, advisers and vocational trainers of the ordinands for their efforts in seeing that their sons passed through proper formation.

Making allusion to the scriptures, Bishop Ezeokafor stressed that no one took the status of priesthood upon themselves, rather, they were called by God; a development that warranted him to make enquiries about the eligibility of each of them before the ordination.

He warned that without proper enquiry, one could receive the laying of hands of priesthood in error.

The Awka Diocesan Chief Shepherd said that when the announcement was made for their ordination, it was a time for sober reflection and not necessarily for jubilation, owing to the enormous tasks laid before the persons who were set for ordination; whether as deacons or as priests, explaining that those persons needed prayers.

Bishop Ezeokafor however told the priests that there was no need to fret, rather, they were expected to be fervent and upright without losing sight of their calling. He added that their ordination as priests was pleasing to God.

He said the congregation had expectations of them and their major responsibilities included pastoral duties, mediating between the congregation and the Church, administration of various sacraments, as well as blessing and teaching them the ways to heaven. He added that one’s faith was aided by another’s.

The Bishop said that a lot of the members of the congregation did not have the capacity yet to stand on their own but were able to stand when they saw others who were doing well in the faith.

He charged them to show the light of Christ as people who looked up to Christ, as well as not be people who said one thing and did a different thing. He exhorted them not to derail from their calling as priests who had the congregation looking up to them as leaders who brought people to the place of healing.

The new priests were further charged to prioritize the salvation of their members and not focus on material support, while the congregation was charged not to make unnecessary demands from priests, but approach them with things that built them up spiritually.

The priests were also asked to seek the good of their parishioners, lay down their lives for their flock and have in mind that the sick ones among their parishioners needed their attention; adding that they should not be like people who were working for themselves alone.

Bishop Ezeokafor said that most members of the congregation saw perceived priests as humans in one part, and spirits in another; recalling how a priest was admitted in the hospital, yet, some parishioners traced him to the hospital to come for sick call. He urged the priests to be mindful of their conducts and not be found joining the crowd.

The ordination Mass was later followed by a flamboyant display of various cultural bands and activities, especially from Anambra communities, whose sons were ordained priests, as they paraded in a joyous mood.