The Association of Polytechnics lecturers in Nigeria, Academic Staff Union of Polytechnics (ASUP) has demanded that the government should at least meet the resolution it had with the Union on 27th April which was brought to an abysmal low.

They made this known during a press briefing at the Auditorium of the Federal Polytechnic, Oko, Anambra State, on 25th may 2020 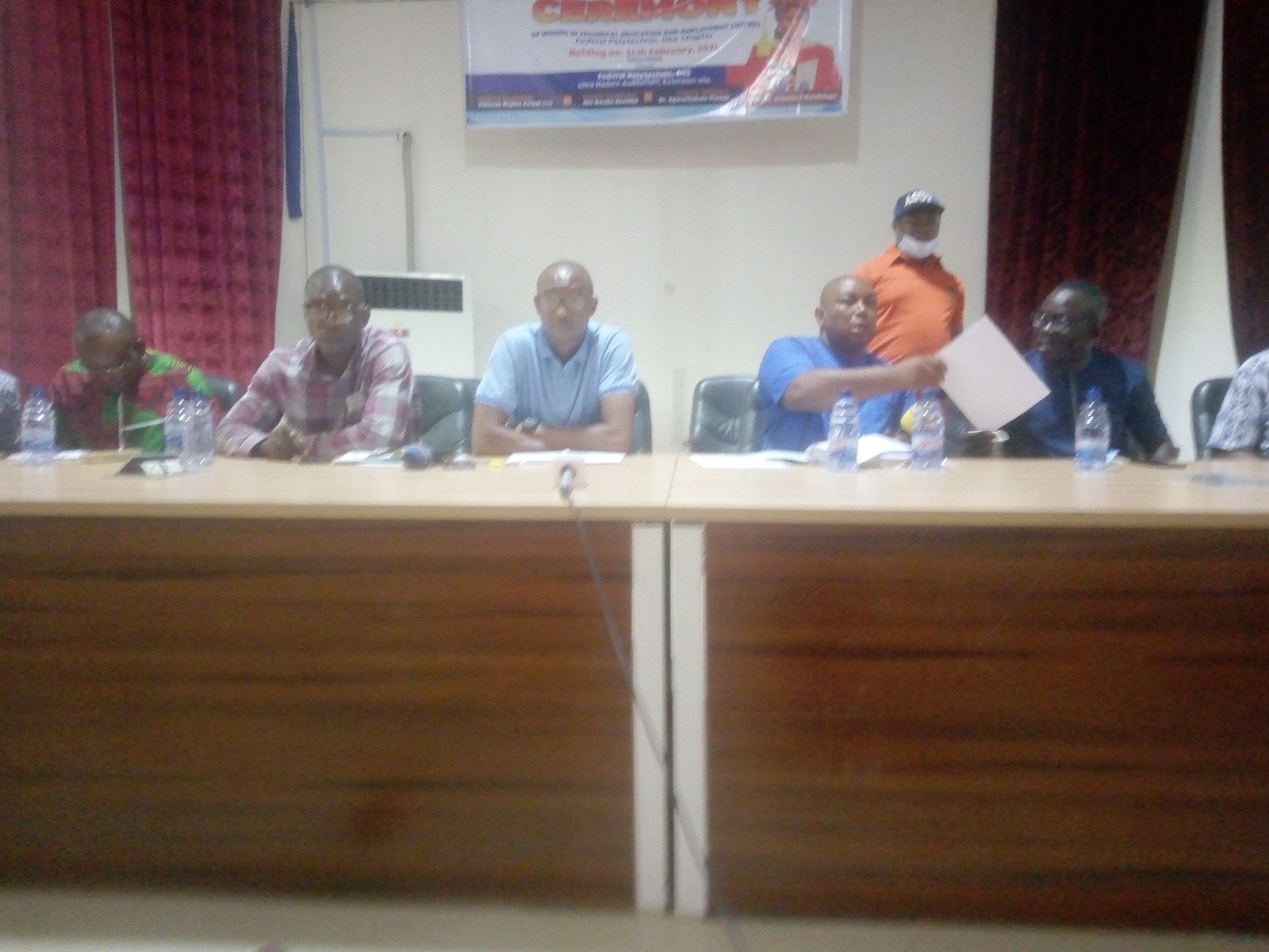 3rd from left: ASUP National President, Comrade Anderson Ezibe. On his left, is the Chairman, ASUP Oko Chapter, Comrade Onyebuchi Igbokwe and others while briefing the Press.

The National President of ASUP, Comrade Anderson Ezeibe, flanked by the Federal Polytechnic Oko branch chairman of ASUP, Comrade Onyebuchi Igbokwe, said the association, for now, was asking for only N19 billion out of a total N823 billion that the Federal Government earlier agreed with the union to inject into the polytechnics education nationwide since 2018.

The ASUP president said that on the 27th of April, they entered into a resolution with the Federal Government, noting that there was a stance in the resolution that demanded immediate implementation. For instance, the government had made an offer to release 15 billion Naira as infrastructure re-vitalisation fund for the sector in lieu of the implementation of needs assessment survey.

‘Our members across all the Federal Polytechnics are owned for ten months with respect to arrears. The government accepted this particular responsibility and also entered into a resolution with us that they are going to ensure immediate release of this fund, which amounted to 4 billion Naira but up till now they have not made an effort.’

The ongoing Strike, Fides gathered, has lasted for 50 days, according to the National President, who ascribed it to poor funding, lack of supervision and improper regulation.

In his words, ‘We are on strike because the sector is not properly funded; we have issues around supervision, from the supervising ministry; we have issues in respect to regulations, where we believe that the sector has not been properly regulated because the core essence of regulations is to set and enforce standard; they cannot be standard when workers are demotivated, and laws are violated at will. There are gaps in the area if infrastructure, so there is no proper regulation in this sector.’

The ASUP president insisted that all efforts made by the association were for the interest of the students, which, he said, was in a bid to impart actual knowledge to students and for them to come out better equipped to face society.

Meanwhile, the association has refuted the claims from the office of the Account General of the Federation which stated that about twenty polytechnics had tax liability amounting to over 19 billion Naira. They insisted that no attempt should be made towards reduction of their salary as the claims were regarded as unfounded.

However, Comrade Ezeibe advised the Federal government to do the needful while he stated that until they were communicated on the extent the government had gone to implement the resolution signed in April 2021, that the strike would still be on.