Nigeria international, Samuel Chukwueze, played his first game since recovering from a groin injury as Villarreal were held to a 1-1 draw by Athletic Bilbao in a La Liga clash staged at San Mamés last Sunday.

Chukwueze who took to the pitch as a replacement for Alfonso Pedraza with five minutes remaining was in action for the remaining minutes of the game. 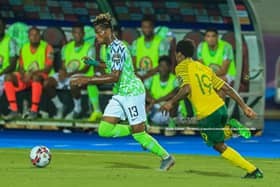 Having returned to action after 44 days of inactivity, Chukwueze has put himself back into contention for a roster spot for the 2021 Africa Cup of Nations qualifiers against Benin and Lesotho.

Nigeria manager Gernot Rohr had feared that the winger was doubtful for those games because the initial prognosis was at least a one-month layoff after his surgery in Munich, Germany.

The German football tactician has stated that he will announce his squad list for the upcoming AFCON qualifiers by the end of February.

Moreso, Fides discovered that are doubts surrounding the availability of Kevin Akpoguma, the Hoffenheim center back has not figured for his German club since January 2 due to a hamstring injury while top scorer Victor Osimhen is back in the treatment room after suffering a head injury against Atalanta on Sunday.