2023 The Year in Sports: Amusan, Osimhen, Brume Stars to watch

The exciting world of football has kicked off in the most interesting manner even before 2023 kicked off. The demise of the most inspiring footballer in History, Pele, in late 2022 and his colorful burial, in 2023, prolonged the Qatar World Cup firecracker.

This is closely followed by the mega million transfer of Christiano Ronaldo to the Saudi Arabia league in what is another fallout of the World Cup in Qatar.

The five-time Ballon d’Or winner secured one of the biggest deals in football history that is worth a whopping $200 million annually to Al Nassr, Saudi Arabia.

That is not forgetting the top heavyweight bouts in boxing and UFC, and the people and countries that will make 2023 memorable.

Following a woeful 2022, the Super Eagles of Nigeria will seek to redeem their battered image as the Africa Cup of Nations resumes in March with the third and fourth rounds of qualifying matches for the 2024 AFCON in Cote d’Ivoire.

The biggest football event in the year is the Women’s World Cup sheduled for August in Australia and New Zealand.

While England’s women’s footballers will be attempting the near impossible by adding the world title to their European crown, Nigeria’s Super Falcons will be making its tenth appearance in the competition having been drawn in Group B alongside co-hosts Australia, Canada, and the Republic of Ireland.

Of course, these football events will be a litmus test for the new helmsman in charge of the Nigeria Football Federation, Ibrahim Gasau, who will mostly be in the news due to the enduring love between Nigerians and football.

As expected the Premiership will be the focus of teeming followers of the game, and maybe, the Saudi League will also get some attention, at least with Ronaldo playing there. Ronaldo has the biggest followers in football.

In Ronaldo’s absence, the EPL can still boast of many stars that will light it up and make impressive news. Among them are Erling Haaland, Kevin De Bruyne, Harry Kane, Mohammed Salah, Naby Keita, Martin Odegaard, and Busayo Saka, and for the African  audience, who would be tracking their players, Kelechi Iheanacho, Wilfred Ndidi, Daniel Amartey, Edouard Mendy, Hakim Ziyech, Thomas Partey, Frank Onyeka, and Alex Iwobi would come to mind.

Outside England, Victor Osimhen is expected to add spark to 2023. In spite of the fact that he missed the 2022 AFCON and World Cup, he still made the headlines. When he is not injured, he is finding the inside of the net and he would explode again in 2023 to lead Napoli to the Serie A title. He scored 18 goals in Italy and Europe last year and will seek to improve his tally.

The most anticipated fight-dubbed ‘Fight of the Era’ between Tyson Fury and Anthony Joshua did not materialise in 2022.

There isn’t any reason why it should happen again but the boxing world for the razzmatazz and lack of a fight that is worthwhile may go for it. 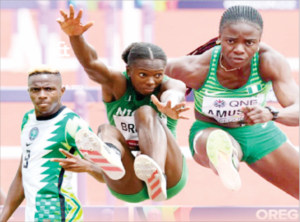 Fury is ready to stage a comeback after beating all the ‘big boys’ around and Joshua may just go for it.

The two will still be in the news in 2023. Joshua for all the opportunities he has flunked and if he still has something to offer. 2023 will either bury him forever or redeem him.

As for the Gypsy King, he will eventually come back from retirement. If he cannot get Joshua, he might wait for Oleksandr Usyk, that is if the Ukrainian will put his belts on the line.

Sadly, Joshua was not the only Nigerian in combat sports that flopped in 2022, UFC champions Israel Adesanya and Kamoru Usman lost their Ultimate Fighting Championship (UFC) titles respectively.

2023 affords them the opportunity to stage a comeback and return to the top.

Locally, basketball will also be in the news as it picks up the pieces of 2022.

As witnessed in 2022, 2023 will further throw up the World Athletics Championship, this time around in Budapest, Hungary. And it is not impossible that those great moments that we witnessed in 2022 will be rekindled.

Similarly, Amusan will be in the news after the podium finish at Oregon’s World Athletics Championshi ps.

Perhaps, she will return to the world stage to reclaim her title and make Nigerians smile again.

Amusan was undoubtedly the most outstanding sports personality in 2022, winning a World Championship title, two Commonwealth Games Gold medals and capping off her historic season with a brilliant spectacle at the final leg of the Diamond League meeting in Zurich, successfully retaining her Diamond League 100m Hurdles title.

She kicked off by leading Nigeria to shine at the 2022 African Championship in Saint Pierre, Mauritius, where Nigeria finished third on the medal table despite competing with limited athletes. There, she won the gold in the 100m hurdles defending her title successfully with a time of 12.57. She also competed in the Women’s 4 X100m and won gold.

At the World Athletics Championships in Oregon, USA in July, 2022, the 25-year-old, broke America’s Kendra Harrison’s six-year world record after clocking an astonishing 12.12 seconds time in the women’s 100m in the semifinals.

She would later write Nigeria’s name in gold after winning in the finals, becoming the first Nigerian to win a World Athletics title. Ese Brume also won silver in the long jump.

Her impressive performance climaxed at the Commonwealth Games in Birmingham. Amusan was the centre of attraction as she won the women’s 100m hurdles, becoming the first Nigerian Track and Field athlete to successfully defend her Commonwealth title, and led Team Nigeria to win the women’s 4x100m event, which was later tainted by dope failure.

In Budapest, Amusan, will surely be a talking point and either he wins or loses, she will make banner headlines.

Another athlete that impressed in Birmingham and guranteed to hug the limelights in 2023 is Brume.

She did well in the Long Jump Final, and with her last jump, she leaped to a new Games Record (GR) of 7.00m to reclaim her Commonwealth title from 2014. Brume, who jumped 7.02m to finish second in Oregon, will, again, be the center of attraction this year.