2023: Peter Obi and the Imperatives of Seismic Shifts

A fundamental axiom encapsulated in the highest law of Nigeria is that power belongs to the people through and by whom government derives its powers and legitimacy.

Consequently, there is an ingrained umbilical nexus between the people and the manner of emergence of holders of governmental powers in a democratic milieu. A notable philosopher laconized it as social contract.

Events preceding the conduct of 2023 elections are manifesting trappings of some paradigms. From the remarkable enthusiasm shown by new voter registrants through the convoluted party primaries to the evolution of youth assertiveness and diaspora ‘mobilisation’, there appears some threshold for dramatic though propitious expectations.

The burgeoning Electora Act 2022 saliently inaugurated an enthralling milieu that outlandishly limited the number of party participating delegates and unwittingly but expectedly witnessed the untoward vice of monetized suffrage.

In the unwonted process, principles and  agreements were compromised. The eternal and wholesome seasoning for nation building was scorned. A fundamental prerequisite envisioned as state policy was negated. Social justice the prime imprimatur of Nigeria’s political objective was pointedly pulverised. In the interim, many did not anticipate that orthodoxy   would suffer challenge

A presidential aspirant clamoured for social justice and competence during his party’s primary election. 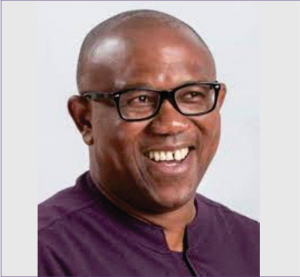 In due course, a gallant state governor, though not altogether without blemish, is now belatedly insisting on it to the discomfiture of instigators of injustice and promoters of callous insensitivity.

An astute clairvoyant, a trending and undisguised apostle of good and accountable governance foresaw the impending charade and concomitant comeuppance. He opted for the unfancied but unfazed mustered seed of Nigerian politics. A paradigm decision that is engendering seismic shifts.

He genuinely and reasonably pleaded his pedigree. He emphasised the attributes of character, competence and capability as the benchmarks seeking public office. He consistently and routinely engaged Nigerians on different fora and platforms while others resorted to recorded programs and outright avoidance of public engagements. Mr Peter Obi canvassed issues supported with facts and figures. A refreshing and sublime departure from the disgusting narrative of the past and present.

Expectedly, Nigerians across region and religion, tribe and tongue rose in applause, appreciation and approval for the seamless, pragmatic and purposive migration to Labour Party. A wholesome threshold for seismic shifts.

Benumbed, syndicated critics charged Mr Peter Obi with lack of structure. Naturally the Masses, the axiomatic and radical owners and holders of power, robustly responded and educated the misfits that power belongs to the people.

Not done, the hirelings mutated, oscillating between the ludicrous and the infamy.  Mr Peter Obi was alleged to be inexperienced. This category of critics conveniently forgot that aside  Mr Peter Obi’s  erstwhile accomplishments, he was a vice presidential candidate in 2019 and attracted electoral fortune for his party.

Still persisting in mischief, a frivolous suit to challenge the due resignation of Dr. Doyin Okupe was instituted and Mr Peter Obi’s son was mischievously accused of IPOB sponsorship. Lately, everything no matter how dubious, tenuous, infantile and fiendish is being sponsored, fabricated and orchestrated against Mr Peter Obi. Yet the impending seismic shifts remain ineluctable and inexorable

Nigerians at home are daily demanding for Mr Peter Obi. On their own costs and inconvenience, oftentimes including threats and attacks, they unflaggingly engage in orderly and spontaneous display of public acceptance of Mr Peter Obi’s presidential enterprise.

In diaspora, the fervent and salubrious insistence on good governance as epitomised by Mr Peter Obi is widespread to the extent that volunteers are opting to assist Mr Peter Obi to the  chagrin and astonishment of the nation’s chief law officer who hurriedly, though characteristically, threatened  to misapply the law.

The highly reputed CNN was not unmindful of the pivotal shifts occasioned by prospects of Mr Peter Obi’s presidency. Without precedence, a Nigerian presidential candidate was granted live interview months and weeks before general elections.

The reason for this is not remote. By conduct Mr Peter Obi has demonstrated candour, comportment, humility, courage and resourcefulness. He has the message of hope and solution for anomalies. He is frugal in management and canny in emotions. He is the aggrieved who would sue for peace.

When he was wished fruitless labour, he dominated his traducer with love. When his admirers were tasked with overzealousness real or imagined, he applogised and  called for circumspection. In the face of vituperative and calumnious criticism, he remained cool and unruffled. These were the same attributes he effortlessly deployed to navigate the affairs of Anambra State without heating up the polity.

Thus, when H E David Umahi introspectively asserted that he loves what Mr Peter Obi is doing, he was more than stating the obvious. The PDP stalwart from Edo State who publicly and unwaveringly insisted on campaigning and voting for Mr Peter Obi is merely responding to the ineffable shifts expected in 2023.

In the light of truth, Nigerians should not bother much about the unguarded outbursts of Shehu Mahdi. In fairness to him, he never accused Mr Peter Obi of lack of character, competence and capability. He also expectedly failed to campaign for his preferred candidate(s) on the basis of these illustrious virtues. Worst of all, he had no message for good governance. Rather, he was fixated with the old order: emblematic politics of tribe and religion.

Though favoured by the dictates of social justice as inaugurated in the Supreme Law of the land, Mr Peter Obi is not solely anchoring his social contract with Nigerians on this premise.

Also, although obviously supported by overwhelming Nigerians,  Mr Peter Obi is not pandering to the nuances of tribe and religion.

From his antecedents and various interactions and interfaces with Nigerians, home and abroad Mr Peter Obi is seeking the mandate to deploy character, competence and capability to inaugurate a milieu of economic stability, political cohesion and social regeneration in accordance with the fundamental objectives and directive principles of state policy as envisaged by the Constitution. These were apparent in Mr Peter Obi’s speech at NBA 2022 Conference at Lagos when he queried; “where are we coming from; where are we now  and where are we heading to”.

Herein lies the seismic shift Nigerians should vote for in 2023.