The presidential candidate of the Labour Party, LP, Mr Peter Obi, and the governor of Anambra State, Prof. Chukwuma Soludo, Friday, August 19, met at the Anambra State Governor’s Lodge in Amawbia in a development that has triggered more questions than answers.

The meeting which lasted for about two hours was held behind closed doors.

The reason for the meeting was not made known to journalists, as both leaders declined press interviews at the end of the session. 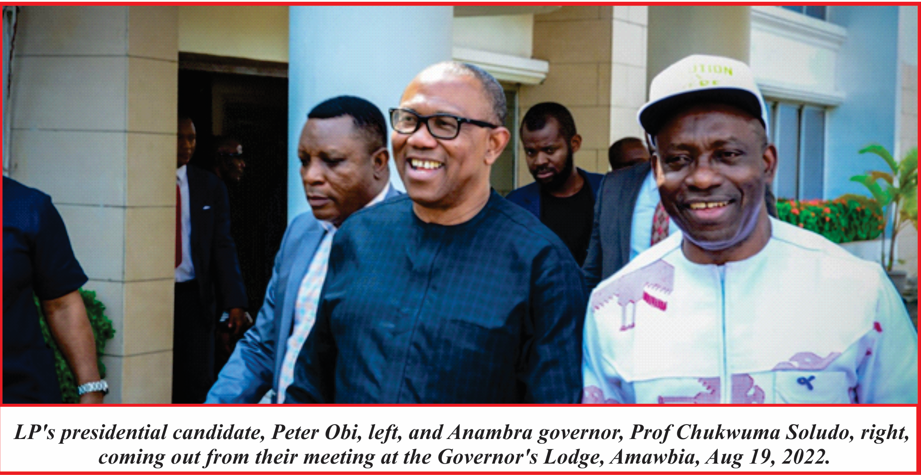 It was however believed that their meeting had to do with the presidential election of 2023.

Just a week ago, Soludo had in an address accused Igbos of playing politics with the heart, rather than the brain every four years. He said it was high time Igbo people came together to build a synergy with other parts of the country if they must take a shot at the presidency.

Some political watchers had interpreted the speech to mean that he was opposed to the presidential bid of Obi, but Friday’s closed door meeting left all guessing.

Meanwhile, the Chief Press Secretary to Soludo, Mr Christian Aburime in a terse press statement on the visit failed to state what was discussed at the meeting.

Aburime said: ‘Both leaders had a mutual discussion behind closed doors. Afterwards, Mr Peter Obi commended Governor Soludo highly for the great job he is doing in Anambra State.

‘Governor Soludo on the other hand, welcomed Mr Peter Obi to Anambra as a prominent son of the state and wished him well on his presidential bid as the presidential candidate of the Labour Party.’

Unlike during the regime of the immediate past governor of the state, Chief Willie Obiano, relations between Obi and Soludo have been cordial, with Soludo extending some friendly gestures to Obi. It will be recalled that Soludo had earlier invited Obi to his (Soludo’s) inauguration, a development that marked the first time in eight years Obi would enter Government House. Soludo also allowed Obi to address traditional rulers and presidents of town unions at same venue to acquaint them with his presidential ambition.

Political watchers see Soludo’s gestures to Obi as more mature, especially when the state stands to benefit from their friendship.

It is however yet to be seen what fruits the recent visit will yield, especially after the All Progressives Grand Alliance, APGA, later warned its members against campaigning for candidates of other parties.

Although APGA has its own presidential candidate in Chief Peter Umeadi, it is believed that APGA’s major worry is the expected ripple effect that Obi’s candidacy will have on other elective positions.