Governor of Delta State, Senator Dr Ifeanyi Arthur Okowa, on Tuesday 18th January, disclosed that the emergence of his successor at a later date, will be likened to the biblical scenario between Elisha and Elijah, a leader chosen and ordained by God, to take the mantle of double portion anointing for good governance and spiritual upliftment of the State.

The Governor gave the clue at the Thanksgiving Service held at Government House Chapel in Asaba, saying that “my successor will be God’s choice, a leader that will keep the fire of this altar burning nonstop for the spiritual upliftment of Delta State.”

The Spiritual implication of the picture painted by the Governor is that God must consistently be honoured in the State beyond his tenure, and to make this happen the choice of his successor must of a necessity be based on divine direction through prayers and waiting on the Lord to speak expressly.

Another take home from Governor Okowa’s expo is that Deltans should discard petty rumours here and there about who will be his successor, because the divine signal is yet to drop from the Throne of Grace, which to a large extent may directly or indirectly affect any shortlisted list of aspirants from lobby groups scheming to be king makers in this political dispensation.

He said God has done so much for the State and his administration in the past seven years and still counting, which was why his family had to thank God and to give Him the honor, praise and worship for being a merciful, gracious, loving, caring and a superlative Big Daddy.

Governor Okowa said the very essence of representative government in democratic politics is to provide good governance, and urged political appointees not to abandon their assigned responsibilities to play 2023 politics, adding that his administration will maintain the temple of good governance till May 29, 2023 handover date.

Dr. Okowa who was accompanied by his jewel of inestimable value, Dame Evangelist Edith Okowa, danced and sang praises to God, and urged Deltans to always seek the face of God, before embarking on any project which include contesting elections, pointing out that he will continue to wait patiently to hear clearly from God, concerning who will be his successor before making  pronouncements.

“But one thing is sure, whoever will succeed me must be one who keeps the fire in this altar burning, and God must direct me on the choice of the person

“I can never take the place of God in deciding who will succeed me; I will pray for God to direct me and not man, so that I don’t go in the wrong direction,” the Governor stated. 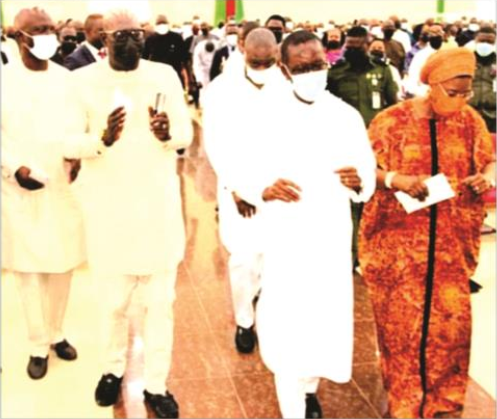 Governor Okowa, therefore, appealed to politicians and other stakeholders who love the State to pray for the oneness and unity in the state, and particularly for him, to enable God to make necessary revelations to him on the choice of his successor, saying we must all pray, including those contesting for positions.

Chaplain of the Chapel, Ven. Charles Osemenam, in his sermon, urged Christians to put their trust in the Lord as God revealed His secrets to those that fear him.

The Cleric advised the people to renew their lives in God, saying that being born again was one of God’s secrets that only those in new birth enjoyed and urged people in authority to fear God as citizens could only rejoice when the righteous were in authorit