Former Governor of Anambra State, Peter Obi, in furtherance of his dream of building a better Nigeria, has called on the Board of Trustees (BoT) members of the People’s Democratic Party, PDP, as well as Nigerians, to see the 2023 Elections as a last opportunity to rescue the nation from further collapse and create a better future for all.

Addressing the PDP BoT members recently, Obi reminded them that the country was fast collapsing and any failure to elect competent leaders in 2023 would spell doom for the country already heavily burdened by high level of insecurity, poverty, worsening debt profile, high unemployment rate, drug abuse and so on.

‘The country you all are part of building, is collapsing before our very eyes and we cannot continue like this. Today, Nigeria tops the list of fragile, failing states and ranks third on the list of most terrorised countries in the world. We have, since 2019, become the world poverty capital. We now have an army of 50 million out-of-school children, out of which about 60% of them have not been to school at all. Nigeria is now the most stressful country to live in, according to the stress level index. 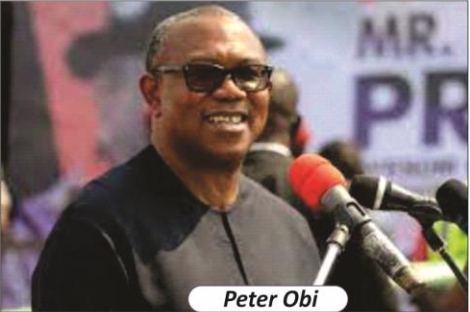 ‘There is so much going wrong in our country today. Do we talk about our debt profile that has become very worrisome, especially if we consider the amount spent in servicing these loans? What is more disheartening is that the loans were consumed rather than invested. The high youth unemployment rate and drug abuse prevalence in the country are serious threats to our development and must be corrected with competent leadership in 2023,’ Obi said.

Presenting his presidential aspiration to the members, Obi maintained that the 2023 Election was not about his winning or losing, but about the future of Nigeria, a country, he said, that should be highly regarded among the comity of nations, but which was currently crumbling under bad leadership.

He called on the members, and indeed Nigerians, to carefully investigate the background of those aspiring to lead the country to ensure that those with track records of success in public life were elected into office. He urged them to avoid being seduced by high sounding words and vain promises of some political aspirants, but focus on competence and integrity for the sake of the nation.

‘It’s time we shunned the rascality that has dominated our political space and focused on rescuing our society. It was a feat we achieved in Anambra State under my administration and it is a feat I am willing to replicate at the federal level, when given the chance. Let us, therefore, join hands to create a better country for ourselves and for our children,’ Obi concluded.