2023 Elections and the Kanu Matter

As the countdown to the 2023 general elections continues, there are indications that all is not well with the secessionist group, Indigenous People of Biafra, IPOB. This comes as the highest decision making organ of the group, Directorate of State (DOS) has insisted it has no plans to disrupt election in the south east, reports Ikeugonna Eleke.

The insistence of the IPOB DOS came in the backdrop of the vow by a breakaway faction of the group led by Simon Ekpa to ensure elections were disrupted in the Southeast. But the Indigenous People of Biafra (IPOB) led by Nnamdi Kanu and which is regarded as the mainstream body, had two weeks ago said it had no plan to disrupt elections in Igbo Land in 2023.

Ekpa had in a video that went viral on social media threatened that there would be no election in the Southeast in 2023, vowing that his IPOB faction would disrupt the process.

But the media and publicity secretary of the mainstream IPOB, Emma Powerful, in a recent press statement, said there was no truth in any information circulating on plans to disrupt election in 2023 in Igbo Land.

Powerful, in the statement, said, ‘The IPOB leadership has for umpteenth time stated unequivocally that part of our modus operandi in our agitation for freedom has never been, is not and will not be violent agitation.

This explains our consistent demand for the UN to organize a referendum in the Biafran territory for the Biafran people to determine their destiny. To this effect, IPOB is neither contemplating nor will it encourage or sponsor anyone or group to disrupt the Nigeria shambolic selection process called election. 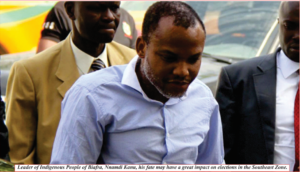 ‘IPOB has constantly made it public that we have no interest in and cannot legitimize the aberration they call election in Nigeria.

We are a focused, determined and disciplined freedom fighting movement, not political thugs, and IPOB is devoted to the cause of liberating our people from subjugation and from modern day slavery and neo-colonialism and will not allow ourselves to be distracted from this very objective.

If in the future IPOB Leadership decides to make further statement on the upcoming Nigeria selection process called election, we shall make such statement through our official channels.’

The above had sparked a debate about the unity in the group, as Ekpa has repeatedly been making broadcasts in the name of IPOB, including fundraising, and has also insisted on the sit-at-home protest in the name of the group which is being observed by people in the Southeast, mostly out of fear of reprisals.

For an average man like Sylvester Sunday, a phone accessories dealer at Aroma Junction, Awka, there is no difference between the two factions. His words, ‘To me, both of them are the same. Any time they declare their sit-at-home, I just obey.’

But Emma Powerful in a WhatsApp exchange with Fides, asked that all utterances of Ekpa be discarded and ignored, maintaining that Ekpa was neither a member of IPOB nor had the powers to speak for the group.

Powerful said, ‘You shouldn’t take what Simon Ekpa says because it won’t hold water. He is nobody in relevance and popularity. IPOB has no business in Nigeria’s selection called election, and, besides, Simon Ekpa is never an IPOB member and I don’t know why you equate his strategies with IPOB’s strategies.

‘I called you before and informed you never to write whatever Simon Ekpa says. Simon Ekpa never introduced any new thing unless what IPOB introduced. Monday Sit-at-home was issued by IPOB and cancelled it and he capitalized on it to be causing problem. Tell your people or friends to stop joining my statement with Simon Ekpa unless they have intentions to destroy IPOB which cannot work for them.’

Meanwhile, the discharge and acquittal of Nnamdi Kanu by the Court of Appeal two weeks ago has raised mixed feelings among many. While many believe that Kanu’s release would help him to come out of detention and take a firm stand on the information he had been passing from prison through a third party, he would be able to totally proclaim by himself whether or not there would be election boycott in the Southeast, and, beyond doing so, would rein in the likes of Ekpa and other alleged criminals operating in the Southeast in the name of IPOB.

But on the other hand, some people believe that the release of Kanu may be an orchestrated plot to use him to scare South Easterners into voter apathy, as he would most likely insist on the realization of Biafra against peaceful elections in the southeast.

At UNIZIK Junction, Awka, where some supporters of Kanu were celebrating his recent discharge, one of them whose name was simply given as Oga Boss, said, ‘Now that Kanu is on his way out of prison, let me see how all these people who are using his name to cause trouble can continue.

‘Be it Simon Ekpa, who does not always listen anytime Kanu passes a message from prison, or all those people who go about kidnapping and dropping the name of IPOB, let me see how they will not listen when Kanu speaks…’

Indeed, there has been news of how some people who were loyal to Kanu have been using his name to make money for themselves since Kanu had been in prison. During the Anambra governorship election in 2021, which was also the very peak of violence in the state,

with many areas declared very dangerous to visit, a governorship aspirant from a popular political party reportedly had to part with millions of Naira to persons who pledged loyalty to Kanu, just to assure there would be safety as the candidate flagged off his campaign.

Meanwhile, two respondents, Victoria Mmerichukwu and Nwama Lubia, who commented on Facebook, said it was still suspicious how all charges against Kanu were dropped. They believed it may be a grand plot to use Kanu through his release to distract the Igbo Nation.

‘It’s indeed suspicious. I see it as a strategy to bring division among Ndigbo because, for sure, some will be agitating for Igbo presidency while others, Biafra, which might cause a declaration of no election in the Southeast,’ they said.

But with the general elections fast approaching, it is clear that the Kanu matter will be a major part of the discussion, at least in the Southeast, where he commands a good number of loyalists.

But it is also feared that his non-release may inflame passions in the zone as it is expected that his foot soldiers may vent their frustrations on their own people.

Recently suspected members of the group set fire to many vehicles and shops in Amorka, Ihiala Local Government Area, in protest over their leader’s non-release, while vowing to inflict more damage should he not be released.

Thus, while it is feared that his non-release will continue triggering violence in the zone, his release may equally come with its own problems, chief of which is a proclamation that elections will not hold in the zone. That is the quagmire which the Kanu matter has put the Southeast into as the country gets set to elect its new set of leaders.