2023: Call for Igbo President, Not Out of Place – Bishop Ezeokafor

The Catholic Bishop of Awka Diocese, Most Rev Dr. Paulinus Ezeokafor, has said that the call for Igbo president come 2023 is not out of place, while describing it as a serious and fair demand by the people of South East, Nigeria.

Bishop Ezeokafor, who stated this at St. Patrick’s Catholic Cathedral, Awka, while delivering his New Year Message, said that following the trajectory of affairs since the civilian takeover of power in 1999, it was fair and just for Igbo to produce a president in 2023. 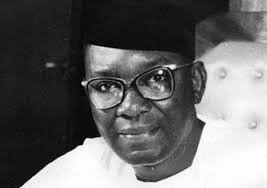 Dr Nnamdi Azikiwe, last and only Igbo man to be president of Nigeria

According to the prelate, it was a serious demand for fairness and justice and everyone who loves sincerity should support the call.

‘Igbo presidency should be considered to avoid generating frictions or reinforcing calls for secession by some sections in the country.

‘At least, we have three major tribes in Nigeria, and since 1999 we have had a Yoruba, Hausa and even a Southern president; so it will be fair and just for Igbos to produce the president, come 2023. This will help to give everyone a sense of belonging and unity. The call is not a privilege, but a right,’ he said.

Speaking on the Anambra 2021 governorship election, the prelate said anyone who must emerge must be familiar with the terrain of the state, stressing that Anambra needed a candidate who would consolidate, as well as surpass the previous governors the state had had.

While lamenting the lopsided appointments and insecurity prevalent in Nigeria, Bishop Ezeokafor urged the Federal Government to be alive to its expectations, even as he reminded its that protection of life and property remained its primary responsibility.

He also called for the immediate change of service chiefs to improve the security situation in the country, while decrying that some persons were feeding on the present security predicament bedeviling Nigeria.

He further asked the Federal Government to diversify the economy in order to improve the living conditions of people.

He said, ‘As a nation, we need to be careful and we need to be proactive. There are new technologies springing up that are knocking off our petroleum products.

‘We must plan for alternative by diversifying our economy. We need to pay attention to agriculture to attain some level of local production of what we consume, rather than relying heavily on importation. We must encourage local production of our food.’

Bishop Ezeokafor also asked the Federal Government to make plans for Nigerian youths, while demanding that youths should be given appointments and groomed to immediately take over power. He posited that young people would come on board with lots of ideas and dexterity.

He warned the Federal Government of excessive borrowing, which, he said, was capable of mortgaging Nigeria, while advising that if they must borrow, they should use the funds purposefully; even as he urged government at all levels to cut the cost of governance.

Speaking on Christmas, Bishop Ezeokafor reminded Christians that the season offered them an opportunity to reconcile with God, even as they prepared for other material celebration. He said Christmas was meant to share love to one another as God had first loved humanity.

He urged Nigerians to continue observing the COVID-19 safety measures to stem the spread of the second wave of the virus.