Our Lord and Saviour, Jesus Christ, was crucified between two notorious thieves as a mark of mockery by the Jews. Opportunity, they say, comes but once. Jesus Christ continued his saving ministry even at the last hour of his life while hanging on the infamous gibbet. The thief at his left hand was hardened at heart. Thus he mocked the crucified Lord to save himself as well as themselves.

Fortunately, the thief at the right hand showed remorse by admitting that he and his colleague in crime actually deserve death for their criminality. He underlined the fact that Jesus Christ was innocent and should not have been crucified. With deep sorrow in his heart, he turned to the crucified Saviour of mankind and pleaded, “Lord, remember me when you come into your kingdom” (Luke 23:42). Pitifully, the dying Jesus turned and replied, “Truly, you will be with me today in Paradise” (Luke 23:43). I wish I will hear such consoling words during my dying hour.

The repentant dying thief since then is commonly referred to as the good thief or the holy thief. It was not the act of theft that made him holy. It was rather the act of repentance, which turns sinners into saints. Indeed, God does not desire the death of a sinner but wants him or her to repent (Ezekiel 18:23).

Hence we have ourselves to blame if we end up in hell. On the other hand, the unrepentant thief is known as the bad thief or the unholy thief. The good thief achieved holiness in a twinkle of an eye while the bad thief merited eternal damnation at the same period.

He possesses a philanthropic spirit. He provides necessary infrastructures to enhance the life of the people. In other words he is people oriented. As a matter of fact the good stingy man is frugal in action, because he is always very careful in the way he handles money. He ensures he does not waste any of it. The bad stingy man is self-oriented and he does not care at all for the needs of others as far as money is concerned. 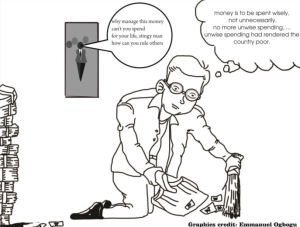 Since Nigeria’s Independence in 1960, our country has been languishing under the yoke of corruption and bad leadership. We are blessed with abundant natural and human resources by God. Regrettably, these have not been harnessed by some of our past and present frivolous leaders.

The natural resources were wasted and the proceeds went into private pockets. The wasteful leaders are careless with public fund, thereby denying the electorates the dividends of Democracy. As a result we are still wallowing in acute darkness due to epileptic power supply after many years of Independence. Our roads nationwide look like the road leading to hell fire.

Majority of our youths are unemployed. Every year our universities produce graduates with unemployment. The old brigades refuse to give chance to the new brigades. They go to the extent of swearing an affidavit by falsifying their age in order to remain relevant. If a person answerered Bomboy at young age, should he continue to answer it at old age? Of course, no; he must change his name to Bomman.

The sentence ‘Obi is a boy’ must change to ‘Obi is a man.’ The old ones should retire gracefully and give chance for the young ones to take over the stage.

Since an idle mind is the devil’s workshop, most of these unemployed youths resort to criminality. Today cyber café scam is daily on the increase. Yahoo boys manipulate the internet and thereby defraud unsuspecting well-to-do persons millions of naira and dollars. Many Nigerians and foreigners have been scammed in one way or the other.

These yahoo boys through their evil mechanizations acquire filthy riches. They even go to the extent of performing human sacrifice to achieve their evil goals. If there is good leadership and employment, such crimes would be minimized.

Today we are living in unimagined fear due to worsening insecurity of lives. Heart attack and high blood pressure are on the increase. People slump and die anyhow nowadays. Kidnapping for ransom is the order of the day. Few days ago I was behind the steering traveling at low speed. Suddenly, a jeep overtook me and stopped beside my car. The driver ordered me to wind down my glass.

My soul nearly departed from my body as I obeyed the order. He only advised me to speed up because the days are evil. Instantly my departing soul came back. I expressed my appreciation for the piece of security advice. Then I pressed my foot harder on the throttle and sped off. Nearly on daily basis we hear of the abduction of innocent persons going about their normal businesses here and there.

Often millions of ransom is paid and the victims killed as well. Known and unknown gunmen parade themselves all over the country. Terrorists have hijacked this country. The citizens are losing their lives every day. Some of our leaders have called on the citizens to defend themselves. We are in real jeopardy. Who will salvage us?

The economic hardship in this country is worsening every day. The cost of living is too high. The prices of basic commodities have soared behind the reach of the common man.

Many Nigerians are hungry and angry. Nowadays, wherever there is any celebration that has to do with food and drinks, gatecrashers fill the arena. Hence printing and distribution of invitation cards are useless.

The democratic condition of our nation is awful. Many people sell their consciences to remain buoyant.  What happened at the recent party primaries is a testimony of what is yet to come. Elections are now cash and carry bazaar, whereby the highest bidder is declared the winner. Selling and buying of votes is now rampart. If this happens in the forthcoming 2023 general elections, then this country will sink to oblivion.

At the critical time in the history of the Israelites, God sent Moses to rescue his people from age-long slavery in Egypt. In 2023 in Nigeria, we need such a good leader like Moses to rescue Nigerians from economic slavery and insecurity of lives and properties.

Pharaoh must let God’s people go. The leader we need in 2023 ought to be a good and stingy leader who will manage the limited resources we have for the welfare of all. We do not want a squanderer at this point in time. The millions of Nigerian youths want to take their destiny into their own hands. They are shouting, “Enough is enough!” They have risen from their democratic slumber and have resolved to participate actively in the choice of the next leader of this troubled Giant of Africa.

This democratic warfare cannot be fought without the Permanent Voters Card (PVC). All eligible Nigerians must obtain their PVC and defend their votes in 2023. Our destiny is in our own hands with God on our side. Thank God the results of the elections will be transmitted electronically as stipulated by the current signed Electoral Act 2022. Rigging and manipulation of results will be minimized. Free, fair and credible election is our desire. We need a vibrant, healthy and selfless leader this time around to lead us into the Promised Land, which is overdue. It is not business as usual. In God we trust!