2022 World Communications Day- Deny No One Joy, Privilege of Being Listened To – Bishop Ezeokafor

By Chioma Ndife and Chisom Nwosu

Most Reverend Paulinus Ezeokafor, the Catholic Bishop of Awka Diocese, has noted the importance of building a listening Christian community, pointing out that listening is crucial to societal communication, report Chioma Ndife and Chisom Nwosu. 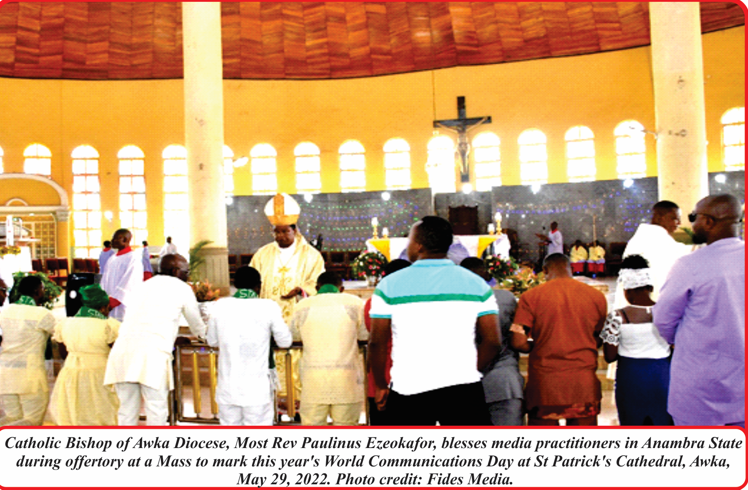 The Catholic Prelate who noted this during this year’s World Communications Day last Sunday at St Patrick’s Cathedral, Awka, said that the downtrodden and the needy must be listened to and not be denied the privilege and joy of being listened to; even as he charged that leaders in all strata of society must also be listened to, together with their subordinates, in order to attain set goals and objectives that would ensure a better society.

The Mass was attended by members of the Nigeria Union of Journalists, NUJ, from different media houses, as well as by the Commissioners for Information, Mr. Paul Nwosu; and his Culture, Entertainment and Tourism, counterpart, Mr Don Onyenji. 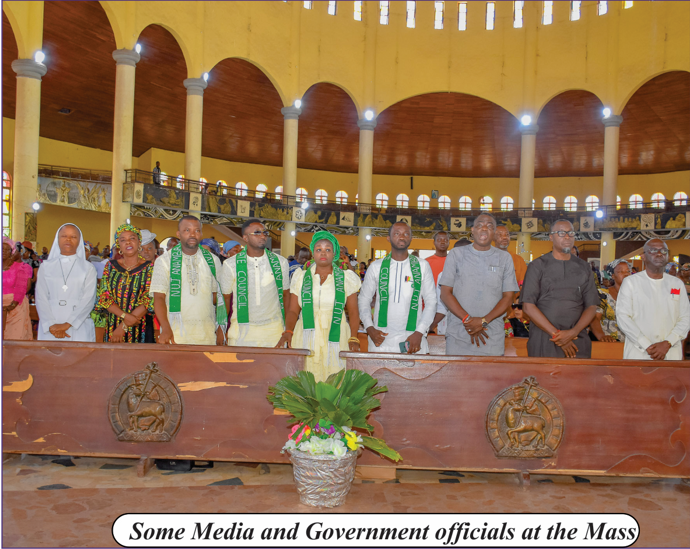 Bishop Ezeokafor who centered his message on the theme of the year’s event, “Listening with the Ears of the Heart”, remarked that it was easier to talk than to listen and that listening was quite different from hearing, as listening entailed hearing to understand. He noted that Christians must begin to listen to the voice of their inner being, which helped them to listen to the voice of God and dwell more on his words.

Speaking after the concelebrated Holy Mass, the Host and Director of Communications, Catholic Diocese of Awka, Rev. Fr. Dr Martin Anusi, explained that the ComWEEK as directed by the Catholic Bishop’s Conference of Nigeria (CBCN) was geared at promoting media literacy at the grassroots.

He appreciated the team that contributed towards the success attained at the celebration and expressed satisfaction that this year’s ComWEEK was totally engaging and impacting.

Speaking at the brainstorming session later, the Commissioner for Information, Mr. Paul Nwosu, said listening was essential to communication which was mostly taken for granted, saying that listening cut across every area of one’s life. He maintained that without effective listenership, important details that gave room to progress would be lost.

He explained that listening from the heart was important as it assisted in bringing about agreement from parties involved.

Stressing the importance of listening among media practitioners, Mr. Nwosu said it helped in reducing the tendency and incidence of fake news.

The Commissioner for Information appealed to those who were causing agony, pain, fear and insecurity in the state to listen to the voice of reason to stop their wanton destruction of life and property. He beckoned on them to utilize the olive branch which Governor Chukwuma Soludo had extended to them to lay down their arms for peace to be restored in the land.

‘I sincerely regret that they are people within the state who have refused to listen to what everyone is saying. I am joining my voice to that of others in pleading with them to listen to the voice of the governor and the Anambra people and put down their guns and go for rehabilitation for better contributions towards the growth of our dear state,’ he stated.

Contributing, the chairman of Anambra State Chapter of the Nigeria Union of Journalists, Dr Odogwu Emeka Odogwu, while concurring with the Information Commissioner, said listening was greatly needed in work places, noting that it would help to solve problems and assist in quickening processes of executing given tasks.

Some of the media practitioners that aired their opinions in line with the Pope’s Message for the year’s Communication Week, including the Editor of Fides Newspaper, Jude Atupulazi, all advocated for Journalists to desist from instigating violence and fear through their reportage, calling on them to embrace developmental journalism for the betterment of society.

Earlier, while leading at the brainstorming session, the lead speaker, Sir Chuka Nnabuife, the Managing Director, Anambra State Newspaper and Printing Corporation, beckoned on media executives to strike a balance and listen to both actions and inactions which their news report could generate. He maintained that the truth must be told in a diplomatic manner to avoid breeding violence through their reportage.

Highlights of the occasion included thanksgiving by the Nigeria Union of Journalists and group photographs between the media practitioners and the Bishop.

The World Communication Day celebration, an event held annually by the Catholic Church, was established by Pope Paul VI in 1967 to encourage Christians to reflect on the opportunities and challenges that the modern means of communication afford the church to communicate the gospel message.

The Communication week (ComWEEK), lasted for a period of one week: 22nd to 29th of May, 2022, with exciting programme, talks, discussions; including an interactive session with students from various secondary schools. It also involved issuing of certificate to participants and many more.