Ahead of November 6 Governorship Election in Anambra State, Center for Strategic Leadership & Youth Orientation, Censtleyo, has assumed the forefront of leading youths dialogue with political parties to ensure that a credible candidate emerges as the next Governor of Anambra State.

Fides gathered that Censtleyo through the programme, engaged the major political parties in an exclusive chat on the need to provide a level playing ground for all the aspirants jostling for the ticket to contest for the Anambra State Governorship Election come November 2021. Geared 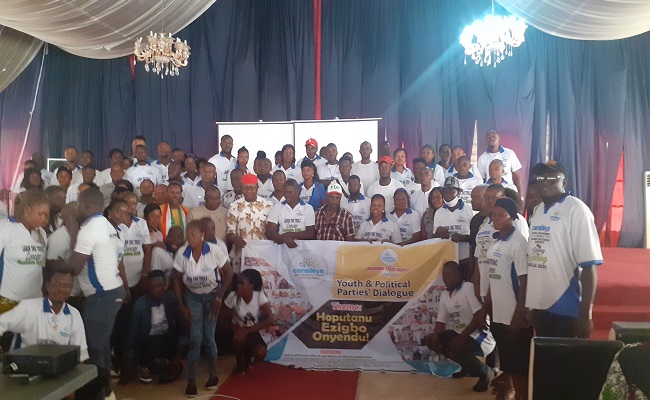 The political chat was put together for the political parties and their aspirants, however only the People’s Democratic Party, PDP, and some of their aspirants, namely Mr. Valentine Chineto Ozigbo and Dr. Godwin Maduka who was represented by his Campaign Director honoured the invitation.

In their opening speeches, the Founder of the organization, Felix Imah and the National Coordinator, Okwudili Nwadiogbu, explained that the essence of the programme was to ensure that political parties play according to rules and that candidates were not selected on the basis of the higher bidder gets it all.

Imah maintained that since party leadership was key to getting who drives the activities of the State, the group thought it wise to engage them and dialogue with them on the importance of electing credible candidates in the upcoming primaries. He said that the group with 23, 000 registered members in the state would keep dialoguing with candidates to ensure that the best emerges.

The programme Lead of the group, Uche Mmadubuko, who disclosed the theme of the dialogue as ‘Hoputtanu Ezigbo Onye Ndu’ described politics as an investment which must be handled with all care to yield development as a positive dividend. He maintained that the event was geared at getting all the young people to become active players in the political scene rather the passive players they have been forced to assume over the years.

He beckoned on the youths to ensure that a credible candidate who would fulfill the social contract with the masses was elected. He said it was important for youths to engage political parties to ensure that the rightful candidates emerges in their primaries, saying that the youths were interested in a good candidate who can deliver the dividend of democracy not necessary party.

Madubuko noted that in order to do away with apathy in the upcoming election, there was need for more mobilization, sensitization and repositioning of the youths whom he said account for more than 85 percent of the voter’s register.

Speaking on their preparedness to provide a level playing ground for all Aspirants, PDP Spokesman, Sir Chris Chikelu Jnr, explained that their candidate will be elected through a delegate and ad hoc election process. He said that the primaries will be conducted in a very democratic manner, noting that the party has been putting the necessary materials and resources in place to ensure that all the aspirants were accommodated in the process.

Chikwelu who is the special adviser to Anambra State PDP Chairman, assured that the primary election will be conducted in a very transparent, credible, free and fair manner to ensure that anyone who emerge becomes the consensus candidate of the party delegates.

Speaking to Journalists, a frontline contestant of the PDP, Mr. Valentine Ozigbo, expressed confidence that PDP will create a level playing ground for all the contestants, noting that his tours across the State was to endear himself to the delegates for his eminent victory in the party primaries. He said that the conduct of free and fair primaries will serve as a unifying factor that would motivator those who lost out to support the winner.

Ozigbo who described the youths as a force to reckon with in Nigeria as a result of their strength, number, energy and intellect to fight for a course, commended them for creating the platform for interaction with intending political players in the state.

Contributing, the DG of Dr. Godwin Madueke Campaign Organization, MarkJoe Onwudinjo, likened the youths as the bedrock of any nation and said that for positive and long-lasting progress to be made in Nigeria, the youths must lead.