2020 was a very short and turbulent year for all in Nigeria, and Anambra had her fair share of the turbulence. In this report, Ikeugonna Eleke brings you the year in retrospect, with highlights of most of the events that made news through the year 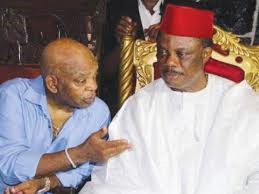 The Obiano/Eze feud dominated much of 2020

Fire Disasters: The year started on a very grim note, when on a sunny January afternoon, a tanker conveying petroleum product fell at Upper Iweka Area of Onitsha, spilling its product on the road. The petroleum product, said to be fuel, flowed through a drainage channel, sparing densely populated residential areas and motor parks, and went about three kilometers away to the very popular Ochanja Market, where it burst into flames, destroying shops, wares worth hundreds of millions of Naira and also taking lives with it.

That singular tragedy seemed to set the pace for more as no day passed without one petroleum tanker falling in one part of the state or the other, spilling products and igniting fire. On one occasion, another tanker fell in Onitsha too, igniting fire at a mechanic workshop, while tens of vehicles in the workshop were totally gutted by fire. In Awka, Nnewi, Agulu, Ekwulobia and other parts of the state, it was one fire accident after another, all caused by petrol tankers, until the state governor, Chief Willie Obiano, was forced to ban daytime movement of tankers, a law that never worked, to date.

Nigeria Police Games 2020: This very beautiful event opened the curtain for Anambra and her people in the year 2020. The event which held in February and in various parts of the state, saw the entire state being decorated in very beautiful colours. It was the 12th edition of the game which holds once every two years and provides men and women of the Nigeria Police Force the time to recreate and unwind.

There were over seven centres around the state where the events held, Fides reporter who moved round the state reported that from Ekwueme Square, the proposed venue of the opening ceremony of the game was bedecked in the colours of Anambra State and that of the Nigeria Police used to decorate the centre. 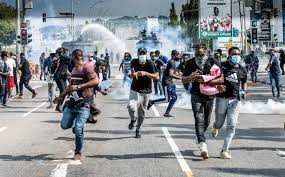 Force spokesperson, DCP Frank Mba, said over 5,000 sportsmen and women from across the country, including from various police zones, would be at the event. For Chief Willie Obiano, the governor of the state, he saw differently. For him, he did not just see recreation, or money spent on the event. Rather, he saw it as an opportunity to upgrade sporting facilities in the state. He also considered that for 5,000 athletes to come into the state, it would have a spiral effect on commerce. Thus, he declared that the state stood to make over N1billion from the event. That, on its own, was economic sense.

COVID-19: In the entire world, COVID-19 was the biggest news of the year, and the pandemic is not in a hurry to leave as it equally crossed over to the New Year with the rest of us that were not killed by it. In Anambra its effect was not as devastating as it was in other parts of the country where prominent individuals were lost to the pandemic.

However, in Anambra, a state that thrives solely on commerce, the lockdown which came with the pandemic dealt the state and its people a big blow.

For over two months, commercial activities were put on hold, with markets opening only occasionally for people to restock their kitchens, even as money was not also in circulation for the restocking. When eventually markets began opening, everything had already been disrupted, and to say that to this date, most families have still not recovered from the blows dealt them by the pandemic, even as we journey through 2021.

Obiano/Arthur Eze/Traditional Rulers Feud: One major news that trended in Anambra in 2020 was the feud between the state governor, Chief Willie Obiano, and billionaire oil magnate, Prince Arthur Eze of Ukpo kingdom. The feud first started as just name-calling by the oil magnate at a press conference he addressed in his palatial mansion, where he accused Obiano of tampering with local government funds.

He told everyone that he would sue the governor for not conducting local government elections, tampering with funds accruing to the local government areas and for not dedicating five percent of the state funds to the traditional rulers. As if on a mission to draw a pound of flesh from the governor, Eze addressed journalists during the inauguration of the Zone 13 Police Command, where be praised himself for single handedly attracting the zonal command to Anambra. He lampooned Obiano for secretly working to thwart the attraction of the zonal command, saying that the governor had wanted to divert it to Aguleri, his home town.

For a long while, Eze tackled Obiano to the extent of calling together the traditional rulers and promising that he would be paying them monthly allowances to put Obiano to shame. Eze seemed just too big for anyone to take on without regretting it, so for Obiano too, he simply let him be. He (Obiano) however found his chance when Eze took 13 traditional rulers in the state on a trip to Abuja to meet President Muhammadu Buhari. It was believed that part of the reason for the trip was to demarket Obiano before President Buhari. Then Obiano bared his fangs. Not on Eze anyway, but on the traditional rulers who travelled with him. First Obiano suspended Igwe Peter Uyanwa of Ukwulu for hosting the monarch and Eze in his palace, then he suspended the 12 monarchs who joined Eze to Abuja.

To date, that suspension has thrown a lot of communities in chaos, as some quickly pushed aside their suspended monarchs to elect new ones. In some communities, the governor also pardoned the suspended ones who returned only to be told their thrones had been taken. In some others like Nawfia Community, Obiano outrightly removed the monarchs, and in this way, confusion has remained in most communities.

#EndSARS: This was a nationwide uprising which rocked Nigeria throughout the month of October. This came just when life was returning to normal again after the whole coronavirus lockdown. It was an agitation for the abolition of a police tactical squad known as Special Anti-Robbery Squad, SARS, but weeks after it happened, not even the disbandment of the unit by the Inspector General of Police, Adamu Abubakar, could quell it.

In Anambra, just like in other parts of the country, youths assembled at Aroma every day, calling for the disbandment of the group, which later snowballed into agitation for an end to bad governance, corruption and other maladies plaguing the polity. During the period, the most mentioned name became James Nwafor, a retired Chief Superintendent of Police who headed the SARS in Awkuzu, which is said to be the most notorious detention camp of the men of the unit in the country.

The protest was later hijacked by criminal elements, and property were destroyed, including privately owned ones and those owned by government, while wares were looted from shops. It was a time when lawlessness took over the state as the police were been overwhelmed and caused to disappear from the streets and even from their stations. Criminals took over and operated without restraint. Save for the civil war, no peacetime destruction of such level had ever been witnessed in Nigeria.

Cult activities: The activities of cultists in Anambra State was also one that gave the people of the state cause for concern. This became even more intense immediately after the EndSARS violent protest, after arms had gone into the wrong hands, and police also disappeared from the roads.

On several occasions, residents of Awka and Onitsha and other towns around it were harassed and robbed at gun point, and their possessions taken forcefully. There were also incessant killing of cultists by rival groups in broad day light, such that it became no news to wake up every morning to hear stories on the activities of the previous night where cultists either engaged rival groups in gun battle, or the body of a gunned down member was found along the roadside; or even how the cultists simply invaded nearby shops to loot.

Though Anambra is considered among the most secure states, the activities of cultists put a question to that claim, just as the trend may have also crossed with all of us into the New Year, and needs to be urgently tackled.

Governorship Zoning: The zoning of the governorship seat of the state also took a front seat in the discussions across the state in 2020. It started with a group, Great Anambra Forum (GAFORUM) which first began a campaign for the governorship seat to be zoned to the Southern zone of the state. The subject generated lots of argument, while some prominent members of the PDP also met to agree on it. The ruling party in the state, APGA also caught the bug and agreed to zone to the south. The PDP later clarified issues, insisting that it had not zoned the position.

As the state gets ready for a governorship election this year, it is expected that the subject will creep in again soon.