A total of 89 graduands, who were found worthy in character and learning were on Sunday, July 15, 2018, graduated by the famous Catholic Diocese of Awka-owned citadel of academic excellence and all round formation, Tansi International College, Awka (TICA), Anambra State.
The graduation ceremony which concluded the six years of academic sojourn of the graduands in the secondary school level, was the second graduation ceremony of TICA for the 14th graduating set of the great college.

Earlier when he led in the concelebrated thanksgiving Mass for the graduation ceremony, the Principal of Tansi International College, Awka (TICA), Rev Fr. Paul Onyebuchi II, congratulated the students, who were admitted for the 2012/2013 academic session for scaling through the process of their academic and character formation in the college successfully, and urged them to remain worthy ambassadors of the college in all their future endeavours.

In his valedictory address, the college principal thanked God for the graduands, who he described as fresh products from the college, and appreciated the graduands for accepting to be molded into shape for their journey into the larger society, in pursuit of their chosen career and ambition in life.

He reminded the graduands that their journey to successful life had just begun, and urged them to do their best and excel in discipline so as to succeed. Addressing the students, Fr. Onyebuchi II said, ‘As you leave the college finally to move into the larger society, always bear in mind that you have the corporate integrity of the school to represent and protect at all times. Avoid bad company, because it ruins good character (I Cor. 15:33). Shun cultism and stay away from indiscipline and ignoble character, especially in the higher institutions. When you gain admission into higher institutions, please, my brothers, study hard and graduate. Do not be counted among those who hover around the university as students, and will never graduate.

The principal continued, ‘Recall that I have always told you to be very careful in the choices you make in life, because they can make or mar you. Always make choices based on deeper conviction that the option before you is approved by God and acceptable by men in all circumstances. When you get into the labour market in future, be proud and courageous to tell the world where you came from. When fortune smiles on you, do not hesitate to fall back on the institution that made you what you are’.

Rev Fr Onyebuchi II, who said he was proud and happy to be part of the family of educators of the future generation, commended the tutorial and non-tutorial staff of TICA for their efforts as they painstakingly tutored and nurtured the graduands from their JS 1 to SS 3. He urged them to hold on to the good work, saying that it was a great priviledge to be a teacher whose job was very critical to the integral formation of the human person.
Speaking on behalf of the parents, Mr. Val Obienyem and Mrs. Jane Anekee, admonished the students to be embodiments of worthy character that represented the worthwhile formation they were given in the college.

Responding on behalf of the graduands, the former senior prefect, Anthony Igbokwe, appreciated the TICA management and staff for their love and the best formation they were given. Igbokwe said they would uphold the corporate integrity of the college, and become good ambassadors of TICA in future. 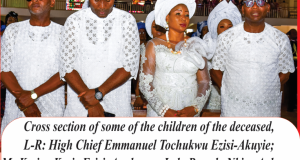 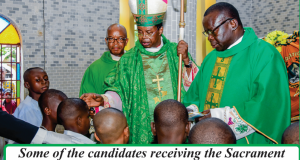 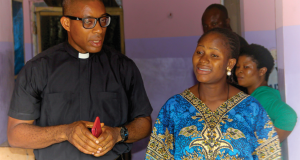