The late Matriarch, Amatu, who died at the age of 96 on December 18, 2019, was the mother of the Catholic Bishop of Okigwe Diocese, Most Rev Solomon Amanchukwu Amatu, Mrs Fidelia Anigbamkpu and Mr Reuben Amatu.

In his remarks, Most Rev Amatu, who was a former Auxiliary Bishop of Awka Diocese, thanked God for the conversion of her mother from paganism to Christ Apostolic Church in 1962, before convincingly becoming a Catholic in 2003.

The chief mourner thanked all who contributed to the conversion of his mother, especially the National Catholic Women’s Organisation, who honoured her with Ambassador of Mary Award. Bishop Amatu also appreciated all who supported the burial ceremony and joined in the Mass for the repose of the soul of his late mother.

In his homily, the Catholic Bishop of Awka Diocese, Most Rev Ezeokafor, said the Eucharistic celebration, which he described as the greatest prayer, was in thanksgiving to God for the life of a devout Christian, the late matriarch, for whom he prayed for God’s mercy.

He stressed the importance of prayers for the dead, noting that the prayers, especially for the souls in purgatory, were to enable them to enjoy the beatific vision in heaven. Pointing out that death was a necessary end, the Catholic prelate enjoined all to make the best out of their lives with what God gave them so as enjoy eternal happiness in heaven in the end.

Speaking on the occasion, the Governor of Anambra State, Dr Willie Obiano, urged all to enjoy the peace and tranquility, which, he said, existed in the state.

In their various interviews with Fides, the deceased’s only daughter and first child, Mrs Fidelia Anigbamkpu; the daughter-in-law, Mrs Celina Amatu; one of the matriarch’s grandchildren, Dr Solomon Anigbamkpu, as well as a relative, Chief Gabriel Nwokoro, eulogised the late Mrs Amatu as an ambassador of faith and unity whose prayer life and acts of charity were infectious.

Also speaking to Fides, an in-law of the family, Rev Fr Francis Chidume, described the deceased as a devout Catholic convert who was outstanding in her life of faith and charity, as well as an organised and soft spoken woman. Rev Fr Chidume, who is the chancellor of the Catholic Diocese of Awka, urged the children and grandchildren to sustain the legacy their mother left behind.

The family through, a written brief biography, described the deceased as a beautiful, energetic and talented singer who had a golden voice.

They further described the late Mrs Amatu as an ardent and devoted member of Christ Apostolic Church, popularly known as Odozi-Obodo, from 1962 until 2003 when after attending the episcopal consecration of her son, Bishop Amatu, she convincingly embraced the Catholic Church and remained a devout Catholic till death.

The late Mrs Amatu suffered several health challenges after she slipped and fell in her act of charity to assist someone his vehicle was about to be gutted by fire with buckets of water. Her intestines were affected, and she had over four major surgeries.

The chief mourner, Most Rev Solomon Amatu (2nd right), leads in the burial rites. 1st left is the homilist at the Mass and Catholic Bishop of Awka Diocese, Most Rev Paulinus Ezeokafor.

The Catholic Diocese of Okigwe coming for condolence.

Chidume Family of Abagana (one of the in-laws) coming for condolence. Mrs Cecilia Amatu (with her late mother-in-law’s picture), welcomes her maiden family members. Behind Mrs Amatu (left) is his brother and Chancellor of Awka Diocese, Rev Fr Francis Chidume. 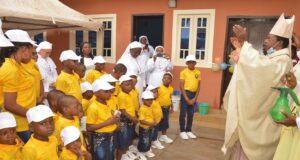 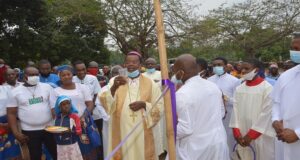 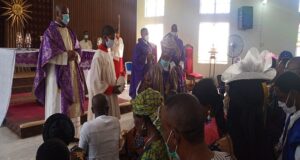